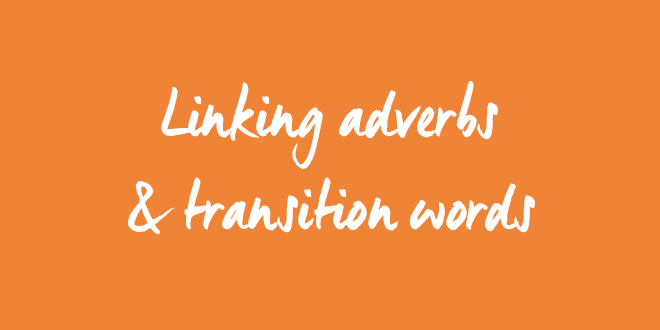 English grammar can be tricky at times, especially when it comes to finding the correct connectors or linking words. Today, to try to make the language that little bit easier, we are going to take a look at how to use linking adverbs and transition words correctly so that you can try to make your English more smooth when speaking.

Let’s remember what linking adverbs and transition words are. They connect two independent clauses or sentences. They provide transition between ideas. They can also be called conjunctive adverbs.

They can be used at the beginning of a sentence or mid-sentence with punctuation.

When do we use each connector?

Ok, we will now look at the most used transitional words. Yes, it’s quite a long list – don’t worry, just understand when we use each one and practice making sentences with them.

Accordingly – in a proper or appropriate way : in a way that suits the facts, needs, or requirements of a situation.
Example: “Susan is an intern and she is paid accordingly”

Besides – synonym of also; in addition to what has already been said.
Example: “I really want to go to the party, and besides, it’s close to my house”

Consequently – happening as a result of a particular action or set of conditions.
Example: “The price of real estate has gone up. Consequently people have to move outside the city”

Finally – at the end of a period of time.
Example: “After years of arguing, Tim and Tina finally got divorced”

Furthermore – in addition to what has been said.
Example: “Bruno always makes amazing art. Furthermore, he’s such a nice man!”

Hence – for this reason.
Example: “The company lost a lot of money. Hence, the manager was asked to resign”

However– used when you are saying something that is different from or contrasts with a previous statement.
Example: “Mary should stay at home and study. However, she decided to go camping”

In fact – in truth — used to stress that a statement is true although it may be surprising or unlikely.
Example: “He looks young, but in fact, he’s in his 40’s”

Instead – used to say that one thing is done or that one thing or person is chosen when another is not chosen, cannot be done, etc.
Example: “I don’t have any coffee, would you mind tea instead?”

Likewise – in the same way.
Example: “Everyone in class studies 3 hours a day, we should do likewise”

Meanwhile – at or during the same time : in the meantime.
Example: “Please make something to eat. Meanwhile, I’ll clean”

Moreover – in addition to what has been said. This word is quite formal.
Example: “I’d love to come over for coffee. Moreover, I’ll bring a cake!”

Namely – used when giving exact information about something you have already mentioned.
Example: “Malaria can be prevented, namely by taking malaria tablets and using a moskito net”

Nevertheless – in spite of what has just been said.
Example: “Joy doesn’t like avocados, nevertheless she ate them for her husband”

Nonetheless – in spite of what has just been said.
Example: “We’re always arguing, she’s my best friend nonetheless”

Otherwise – in a different way or manner.
Example: “After the fire, all the books had been burnt or otherwise destroyed”

Similarly – in a similar way : in almost the same way.
Example: “My sister’s and my house are decorated similarly: we love minimalism”

Thereafter – after that.
Example: “Thereafter, the companies merged together”

Therefore – for that reason : because of that.
Example: “The mobile phone is light to carry, therefore it’s very conveniant”

Thus – in this way or manner : like this. This word is also very formal.
Example: “The detergent is highly concentrated, thus you will have to dilute it”

As we can see from this post, there are many ways in which we can link two independent clauses in English. Don’t worry, however, if you are not able to eat them all at once, there is plenty of time for that to be done. On the ABA online course, you will find more information about linking adverbs and transition words the more you study with us. In addition to getting free access to 144 video classes when you sign up, you will also be able to access other English materials such as podcasts and exercises.

Linking sentences has never been easier thanks to @abaenglish