Today we will learn vocabulary with the Dead Poet’s Society. This 1989 American drama film was a huge success and remains a classic.

Whether you have watched the film or not, the following scene is a favourite for inspiration.

Keating– O Captain, my Captain. Who knows where that comes from? Anybody? Not a clue? It’s from a poem by Walt Whitman about Mr. Abraham Lincoln. Now in this class you can either call me Mr. Keating. Or, if you’re slightly more daring, O Captain, My Captain. Now let me dispel a few rumours so they don’t fester into facts. Yes, I too attended Welton and survived. And no, at the time I was not the mental giant you see before you. I was the intellectual equivalent of a ninety-eight pound weakling. I would go to the beach and people would kick copies of Byron in my face. Now, Mr. Pitts? That’s a rather unfortunate name. Mr. Pitts, where are you? Mr. Pitts? Would you open your hymnal to page 542 and read the first stanza of the poem you find there?

Pitts – To the virgins, to make much of time?

Keating – Yes, that’s the one. Somewhat appropriate isn’t it.

Pitts – Gather ye rosebuds while ya may, old time is still a flying, and this same flower that smiles today, tomorrow will be dying.

Keating – Thank you Mr. Pitts. “Gather ye rosebuds while ye may”. The Latin term for that sentiment is Carpe Diem. Now who knows what that means?

Keating – Meeks. Another unusual name. Seize the day. Gather ye rosebuds while ye may. Why does the writer use these lines?

Charlie – Because he’s in a hurry.

Keating  – No, ding! Thank you for playing anyway. Because we are food for worms, lads. Because, believe it or not, each and every one of us in this room is one day going to stop breathing, turn cold, and die.
Now I would like you to step forward over here and peruse some of the faces from the past. You’ve walked past them many times. I don’t think you’ve really looked at them. They’re not that different from you, are they? Same haircuts, full of hormones, just like you. Invincible, just like you feel. The world is their oyster. They believe they’re destined for great things, just like many of you. Their eyes are full of hope, just like you. Did they wait until it was too late to make from their lives even one iota of what they were capable? Because, you see, gentlemen, these boys are now fertilizing daffodils. But if you listen real close, you can hear them whisper their legacy to you. Go on, lean in. Carpe. Hear it? Carpe. Carpe. Carpe Diem. Seize the day boys, make your lives extraordinary. 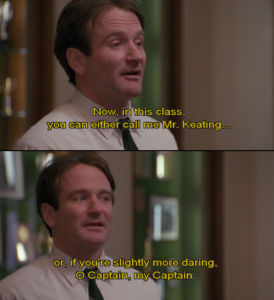 Daring – willing to do dangerous or difficult things.

Dispel – to make (something, such as a belief, feeling, or idea) go away or end.

Rumours – information or a story that is passed from person to person but has not been proven to be true.

Fester – to become painful and infected.

Equivalent – having the same value, use, meaning, etc.

Byron – Lord Byron was a British poet and a leading figure of the Romantic movement.

Unfortunate – Having bad luck. Also, not appropriate or desirable.

Hymnal – a book of hymns. Hymns are religious songs.

Stanza – a group of lines in a poem.

Somewhat – in a small amount or degree : to some degree.

Worms – a long, thin animal that has a soft body with no legs or bones and that often lives in the ground.

Peruse – to look at or read (something) in an informal or relaxed way.

Invincible – impossible to defeat or overcome.

The world is their oyster – If the world is your oyster, your life is good and you have the ability to do whatever you want to do.

Legacy – something (such as property or money) that is received from someone who has died.

Lean in – to move forward to look at something closer.

Gather ye rosebuds while ya may, old time is still a flying, and this same flower that smiles today, tomorrow will be dying  – It is the first line of the poem “To the Virgins, to Make Much of Time” and it advises people to take advantage of their life while they are young.

If you enjoy watching films, check out our Learn English with Movies post. It was great tips for you to make the most out of films to learn new vocabulary.