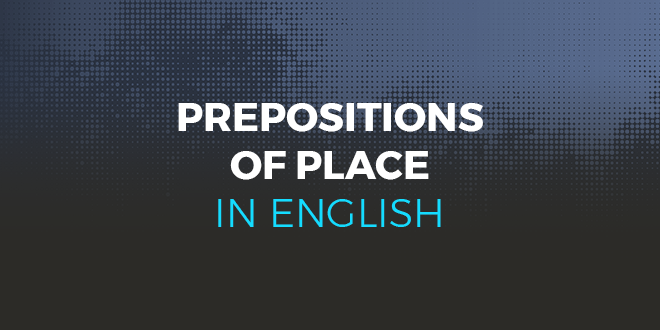 Prepositions of place in English

Prepositions of place may be a bit tricky at first but in this blog we are going to try make things that little bit easier, just for you!

A preposition of place is used to say exactly where an object is placed or where the location of something is.

Let’s take a look at some of the most common prepositions of place, shall we?

I’m brushing up prepositions of place in #english with @abaenglish

It’s used to show an exact position or a particular place.

Example – Janis is at the door open it quickly, it’s freezing outside!

Example – All of your old books are in the box over there.

It’s used to indicate something on a surface.

Example – I left my keys on the table at work, so I can’t get in!

Blow or at a lower level than something, or covered by something.

Example – The girl is hiding under the table

It means on the side of or next to something else.

Example – I parked my car beside yours but now it’s not here.

It means further forward than something or someone.

Example – The library is in front of the school.

In the middle or inside of something, surrounded or enclosed by it

Example – Mike has just jumped into the swimming pool.

It’s the opposite of into and means removing an object or person from the inside of an enclosed space to the outside.

Example – Please take your dirty shoes out of the kitchen. I have just cleaned the floor.

Directly at the back of something or someone

Example – Look! Sarah is behind you.

From one side to the other side of something.

Example – The train goes through the tunnel.

Now you practise them! Good luck!