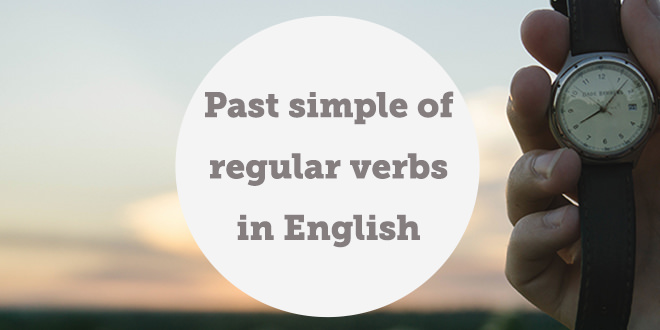 Past simple of regular verbs in English

We all know how frustrating it can sometimes be to learn another language and master its grammar. Today we are going to try to calm that frustration by looking at the past simple tense in English and its use with regular verbs in the past.

What are the rules?

Like most grammar rules in any language, there always appears to be an exception, if not more. To create the past simple of regular verbs in English, the standard rule is to add “-ed” to the end of an infinitive.

The kids pushed each other around last week playing football.

We walked to the beach yesterday morning.

I watched a film with my friends yesterday.

As we can see, the formation of this tense is relatively easy. It is important to bear in mind that if the infinitive ends in a “-d” or a “-t” then the “-ed” that is added on must be said as an extra syllable.

Are there any irregularities with regular verbs in the past simple?

Until this point we are thinking “so far, so good”. Right?

There are examples of verbs in English which require some tweaking in terms of spelling or pronunciation so that the past tense is spelt or pronounced correctly, respectively.

These are not the only irregularities in the past simple but a couple of the most important ones to start with.

Is forming the interrogative easy in the past simple?

Did you push the window open?

Yes, I pushed the window open?

Did he watch a film yesterday?

Yes, he watched a film yesterday.

As we can see, the auxiliary is “did” in the question, however in affirmative answer the regular past tense of the verb is employed. It is also important to remember that if the answer is negative, we also use “did” in negative instead of the verb in negative.

Is there anything else to note?

This tense in terms of conjugations is not overly difficult as the past simple does not change at all, irrespective of the subject. The trickiest part to master would be the pronunciation depending on the spelling of the verb.

If you would like more information on verbs, you can sign up for free to ABA English and check out unit 68 which offers more handy hints and tips.

Best of luck with the studying!

If you got confused with verbs yesterday, @abaenglish can help you out!