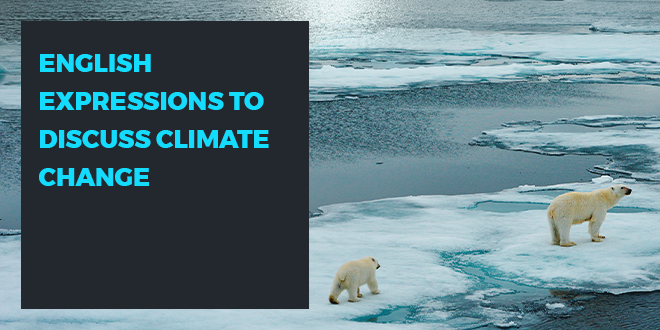 No one on Earth is oblivious to the changes that are taking place on our planet. Climate change is one of those issues that affect everyone. Every day, more and more people are committing themselves to save the planet from a terrible destiny.

Talk about climate change with @abaenglish.

If you have come to this article, that is because you’re also worried about living in a better world. Discussing these problems with as many people as possible is becoming increasingly necessary. That is why we thought that this English vocabulary article would be very useful when it comes to talking about climate change.

Before talking about a change, it is important to know how to talk about what is changing. You probably already know some of this vocabulary as it comes up in how to start small talk with people you have met. You may also have seen it as part of an online English course.

Let’s start with a brief review of the vocabulary as well as the most common ways to describe climate change in English.

You can also form adjectives by adding “-y” to the end of the first five nouns in the previous list.

Some other adjectives that describe the weather include:

To create sentences in English about different weather conditions, we usually use one of the following:

It’s raining cats and dogs! We’ll have to take a rain check on that picnic in the park.

What is Climate Change?

It is a good idea to start your conversation by seeing what you and the person you’re speaking to know about climate change. Some ways to start that conversation include:

You can also go a bit deeper by asking the person you’re talking to about their opinion on the subject:

Once you have started the conversation, you’ll definitely want to go deeper into the subject. For that, knowing the basic English vocabulary for the causes of climate change could be useful.

Carbon dioxide emissions have increased a lot over the last few decades.

Due to these high emissions, the greenhouse effect has become harmful to our planet.

Pollution levels in Japan are so high that there are already illnesses caused by it that are named after Japanese cities.

I think that by now, no one could deny that most of global warming is man-made.

With this vocabulary, you’ll be able to talk about the causes of the climate crisis. Thanks to the constructions you learned in the previous section, you’ll also be able to ask others their opinions about it.

Like the weather, the vocabulary used to describe climate change is constantly changing. This is done in order to impact the greatest number of people and encourage them to take action on the matter.

We are sure that the English vocabulary that you have learned in this article will be useful for discussing climate change so that your voice can be heard all over the world. We are also sure that your level of English will have improved with this new vocabulary. Do you want to test how well you’ve done?

Would you like to continue learning English while fighting to leave behind a better world for the generations to come? If so, we suggest trying our online English course. The ABA English course offers 144 free video classes and short films that represent a diverse array of everyday situations. In each situation, you’ll find the tools you need to dominate any discussion. This means that you’ll never find yourself left with the urge to say something but without the ability. You’ll be prepared to explain yourself comfortably in English anywhere in the world.