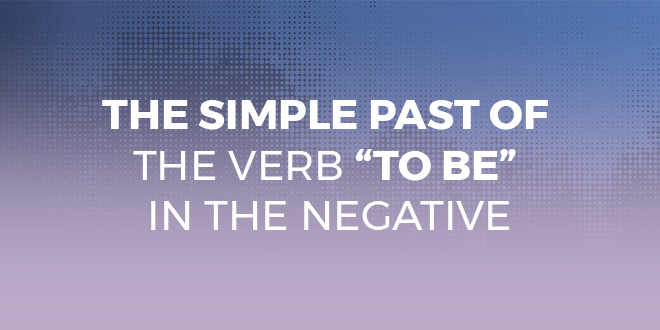 Learn the Verb “To Be” Negative | ABA English

Learn the Verb “To Be” Negative

The verb “to be” is one of the most useful and most used verbs in any language. Since we use it to give information and to correct information, it is very important to be able to use “to be” correctly. This could mean the difference between saying “I am allergic to nuts” and “I’m not allergic to nuts”. While most situations will not be as life-threatening as an allergy, it is still important to know how to form negatives correctly.

I now know the verb “to be” in negative thanks to @abaenglish.

That is why we have written this article that explains how to form the negative of the verb “to be” in the present and past, simple and continuous. At the end, there are some example exercises for you to practice forming the negative, too. If you still have any questions, an online English course could help you clear things up quickly!

The English Verb “To Be”

No matter what your English level, one of the verbs that is used most often in English is the verb “to be”. This is true in many different languages. “To be” can be both the main verb and the auxiliary verb. It is used to talk about qualities, nationality, jobs, ages, relationships, locations, time, personality, and more!

Remember that the verb “to be” does not need an auxiliary verb in questions or negative sentences!

Now let’s look at those three forms of “to be” in the negative:

Remember that in the present simple, there is no contraction for am + not. Instead, “I’m not” is used.

I’m not from Australia. I’m from New Zealand.

You aren’t afraid of the dark, are you?

He isn’t very tall. My sister is taller than him.

We aren’t cousins. We are brother and sister.

The cat isn’t allowed in the house.

The Negative Simple Past Tense

Here are those two forms of “to be” in the negative:

When using the simple past we can also refer to a specific time in the past.

Mike wasn’t very sporty when he was younger.

Kelly and John weren’t friendly to me when we were in school together.

I wasn’t afraid of dogs when I was a kid.

They weren’t very helpful yesterday at the shop. When I asked them questions, they weren’t sure of the answers.

You will also need to use “to be” in the negative for the past and present continuous. Most other verb tenses with “to be” use an auxiliary verb, so the negative will be applied to that auxiliary instead.

But remember that the continuous forms use the same forms of “to be” as we learned in the simple tenses.

Here are some more examples of the present and past continuous tenses in the negative.

He wasn’t swimming when you called. He was at the supermarket.

My sister isn’t studying English this year. She is studying French instead.

I wasn’t paying attention when the teacher told us what our homework is.

They aren’t shopping for a new bed right now. They’re at the cinema.

Now it is your turn! All of the following sentences are in the affirmative. Change them to the negative form, either with a contraction or without. Do both if you have the time and you will really have mastered the verb “to be” in the negative!

Remember that if you would like to sign up to the ABA English course, it is completely free. You will get access to 144 free video classes that you can watch as many times as you need so that you understand the grammar.

I want to learn English online.
I want to download the app.
2019-08-28
Share
Previous Improve Your Vocabulary With 25 Different Ways to Say “Said”
Next English Expressions to Discuss Climate Change