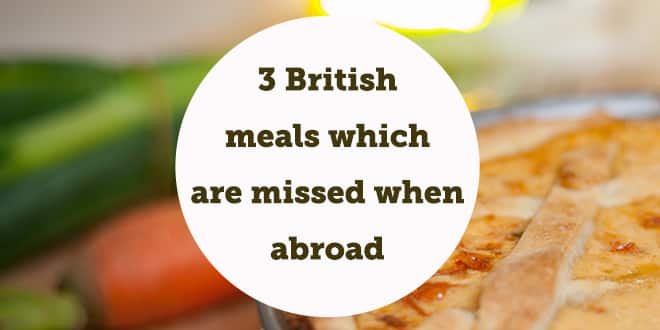 3 British meals which are missed when abroad

When you live abroad, you often start to find that you miss the food from your own country or perhaps treats that are not even just native to your country, but perhaps even your town. It could be argued that for Spanish people, for example, it would be chorizo and a good paella and maybe a good moussaka for Greek people. British people feel exactly the same about food from home, no matter where they end up living. In today’s post we are going to look at 3 home comfort British meals that Brits long for when living away.

As most people know, fish and chips are a staple of British “cuisine”, if we can stretch to call it that. For a British person, it is not uncommon to have fish and chips around once a week or at a push once every two weeks, although not necessarily from the chippy (chip shop) but homemade too. In England especially, fish and chips is usually accompanied by a side of mushy peas but this generally depends on people’s preferences and tastes. Let me tell you that if you haven’t had a proper good old plate of fish and chips, you haven’t lived! What are you waiting for?

Depending on the nation of the United Kingdom that you are in or come from, there can be slight changes in the ingredients, however in general, the breakfast has the staples of sausage, bacon, egg and beans. In Scotland you might have square sausage and potato scone in addition to the breakfast staples. For an Irish breakfast the other components which make it up are soda bread and white pudding. The main point is that wherever you have your fried breakfast (a “fry up” in traditional British slang), its purpose is to do one job- cure you from the night before. This is genuinely seen as a life saving food for anyone who’s suffering from the after effects of the night before at a bar. It can be understood if you think that it does not sound very appetising but believe us when we say that these breakfasts perform miracles.

Wow! This is an absolute must in British “cuisine”! A good steak and ale pie is the best dinner a British person can come home from work to on a Winter’s day. This food is true comfort food and a very hearty meal that almost everyone in the United Kingdom will agree with.  In all honesty, it is much more difficult to find a Winter’s dinner that is so hearty and rich as this. If you happen to venture to the United Kingdom this coming Winter then this a must accompanied by a nice glass of red wine. Not only will it fill you up, but will also make sure that you are ready to tackle the UK’s cold, wet and most miserable Winter nights.

Is there any other type of food that we haven’t mentioned?

Today we have looked at 3 important meals that almost all British people really crave when they are abroad, especially for a very long time. We are very certain that there are many more depending on the region. Have you ever lived in Britain? Which part? What were the main meals there? Our only final piece of advice is to remind you to try these foods when you visit- We guarantee that you will not be disappointed.