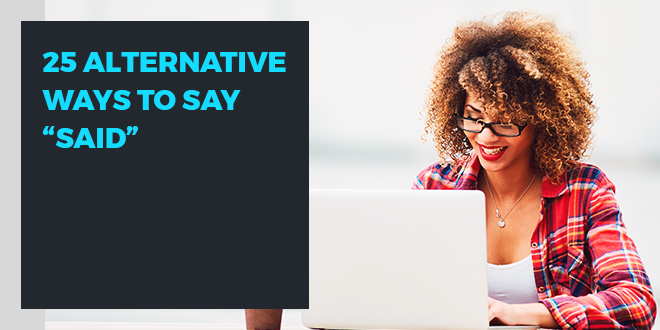 Improve Your Vocabulary With 25 Different Ways to Say “Said”

Improve Your Vocabulary With 25 Different Ways to Say “Said”

Learning a language is not just learning grammar and making sure that you reproduce the words in the correct order. Vocabulary is important, too. Within vocabulary, having a large number of words available to express a thought is important both to be precise and to add variety to your communication.

In English, people often use the word “said” to report what someone has said. But English is a rich language with hundreds of other verbs to get this idea across. In this article, we will introduce you to 25 alternatives to use instead of “said”, complete with meaning and example sentences. Try to incorporate them into your own English and see how others will praise your efforts!

Direct and Reported Speech in English

In English, when someone says something, you have two options to share that information. You can do so using direct speech or reported speech. Since this article is about vocabulary, we do not need to go too deep into the grammar. You have probably already learned the grammar in your online English course or in-person course. Here is a quick review!

Direct speech records exactly what was said, using quotation marks. For example:
“I need to go to the bathroom,” said the child. Reported speech gets rid of the quote marks and reports what was said. In reported speech, the previous sentence would be: The child said she needed to go to the bathroom. But how did the child feel as she spoke? Happy? Sad? Angry?

In any language, we often find ourselves saying what others have said. That is why we have gathered this collection of different ways to say “said” so that you can add some emotion to your language.

This collection of words to say “said” are excellent ways to report what someone else has said while adding a bit of extra information about how they said it.

When we say that something is true but in a confident way, we affirm it.

“There will be no pay increases until next year,” affirmed our boss.

This is when we say or accuse someone of doing something wrong, even though they have not yet been proven guilty.

The eyewitness alleged that the robber had a blue jumper on.

This is when something is made known in a public or formal way.

The government has just announced that it will increase public spending next month.

This can be a written or spoken statement that expresses an opinion about someone or something.

“I loved your speech!” Sarah commented to Dave.

When we wish to openly and freely express who we are or something we have done, we can use this verb.

“I am a Spice Girls fan,” confessed Rebecca.

If we wish to make certain information available to someone, we can use this verb.

“It’s going to be a difficult week,” divulged James to Bryan.

This verb is perfect for when we want to give more details about something or to be more specific about a certain part of something.

My boss elaborated that next month’s budget must be ready by Tuesday.

By using this verb, the speaker is effectively promising that what they say is a fact or is being promised.

“It’s an offer you can’t turn down,” guaranteed my boss.

If we want to say something to give a piece of information in a direct or indirect way, we can use this verb.

David hinted to his sister that she might receive a good present for her birthday.

If someone mentions something, they do it in a subtle way to suggest something to the person that they are speaking to.

To say what emotion was used when speaking, there are a number of wonderful verbs to do so.

This is a common way to say things when people are in love, as it means to say something in an enthusiastic, loving way.

“I love you,” gushed Stephanie to her boyfriend.

Generally, if we want someone to think hard about our advice, we could use this verb as it means to say something as a serious or emotional request.

“You have to do what is best for you,” implored Michael.

When someone wishes to say something in a forceful way that does not allow for any disagreement, then this verb can be used.

“I didn’t do it!” insisted the suspect to the police.

Jeered is often used in the context of sports because it means to shout insulting words at someone.

“Boo!” jeered the crowd when the player on the opposite team scored a goal.

The children moaned that it wasn’t fair after all their toys were confiscated by the teacher.

Sadly, many things are said in anger. These verbs can help to mark what kind of anger was behind what was being said.

This verb can be used in place of “said” if someone wishes to express emotion in a sudden and violent way.

“Don’t touch my stuff!” exploded Jenny to her brother.

When someone is angry, this verb can be used to express that anger.

“Why can’t I go to the party?” fumed Jenny after being grounded.

People use this verb after hearing some bad news as it means that something is said in a loud and angry way.

Sarah howled that she could not go on after hearing the devastating news.

This is when someone talks to somebody else in a serious or angry way, perhaps to criticise their behaviour.

“You should know better,” lectured John to his daughter after he caught her fighting with her younger brother.

This means that someone refuses to accept what someone else is saying in a rather rude way.

“That was not what happened at all,” rebuffed the witness when questioned by police.

Not only do we repeat what others have said, but what we are saying is a repetition as well. These two verbs are a great way to say “repeat”, but with more style.

This verb means that something is read out loud, normally from memory, for a group of people or an audience.

Fred recited the poem to his friends in such a soothing manner they were practically falling asleep.

This verb is used instead of “say” because it is used to express a point that has already been mentioned previously, for emphasis.

“You’re not getting next week off,” reiterated my boss after I asked him about the holidays for a second time.

After so many different feelings, it is important to note how to say things in a positive manner.

This verb is used to make something seem good or attractive to convince someone else to do something, too.

Julia recommended watching the film at night to make it seem even scarier.

Using “praised” instead of “said” is done to express real approval of someone or something.

“The emergency services have done a fantastic job!” praised the mayor.

We use this verb to speak about something in an approving way or to confirm that something is good or necessary.

“You’ll have the best time in Spain,” preached Jane to her son before he left for his travels.

Now it’s your turn! Now that you know 25 other ways to express “said” in English, you should try to memorise them and their contexts. Then you can incorporate them and use them in your own English. In addition, have we said that you can also sign up to the ABA English course? There you will get access to 144 free video classes which will teach you grammar from beginner to advanced. What are you waiting for? Find out your English level and start learning with ABA English today!

I want to start learning now.
I want to download the app.
2019-08-26
Share
Previous Master the Interrogative Words in English | ABA English
Next Learn the Verb “To Be” Negative | ABA English