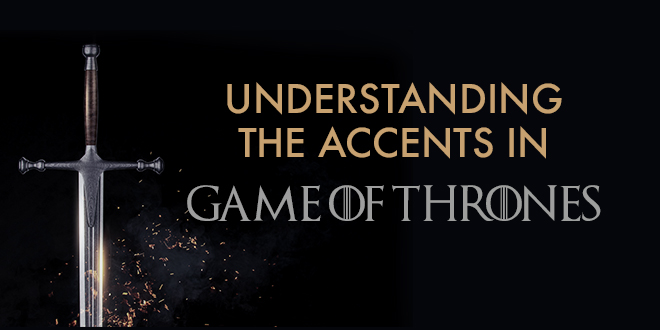 Where are the different accents in Game of Thrones from?

Are you a die-hard GoT fan? So is our colleague Eli; she lives and breathes the George R.R Martin series.

We always recommend watching series in their original version because it’s a fantastic way to practice English. However, in the case of Game of Thrones, it’s obligatory since otherwise you’ll miss out on the array of different accents that are present throughout the show.

Did you know that the different accents of Westeros are inspired by regional accents found in Great Britain? In fact, if you look at a map of the imaginary continent, its geography is suspiciously similar to that of the British Isles.

I know the Game of Thrones accents thanks to @ABAEnglish

Let’s have a closer look…

The accents of Westeros

King’s Landing is the capital of the Seven Kingdoms, and this is reflected in the polished accent of Tyrion, Cersei and Jaime Lannister, based on the received  pronunciation. This English accent used by the characters, also known as the Queen’s English or Queen English, is considered standard English, used by royalty and aristocracy, and by the BBC until a few years ago. Patriarch Tywin Lannister, for his part, exhibits a southern accent that is also considered “posh” or refined.

The Stark house is 100% northern, hence prominent figures such as Ned Stark or his sons have a northern accent, very similar to that of people who live in the Sheffield area of northern Great Britain. The Stark daughters, on the other hand, were educated personally by their mother, Catelyn, who transmitted to them a somewhat more southern accent, since she is not native to Winterfell. This is why Arya and Sansa have accents a little different from those of their brothers.

If you know a little about the history of Great Britain, you will know that in the years 122-132 of the Roman Emperor, Publius Aelius Hadrianus built a huge wall separating what is now Scotland from the rest of ancient Britain. In Game of Thrones there is also a wall, behind which there live mysterious and terrifying creatures, as well as the free folk known as “the Wildlings”. Not surprisingly, virtually all of the Wildlings have a notable Scottish accent. One of the most famous phrases in the series is “You know nothing, Jon Snow” which is said by Ygritte, played by Scottish actress Rose Leslie.

If you know a little about the history of Great Britain, you will know that in the years 122-132 of…

At the time of creating the kingdom of Dorne, George R. R. Martin was inspired mainly by Spain, and the Moorish era. It is a warm and beautiful land, with palaces full of fountains and exquisite tile mosaics. Dorne’s characters, such as the Martells or the Sands, all have a slight foreign accent (mainly Spanish or Italian), since most of the actors who are playing those roles are not British, and their characters do not require a perfect English accent.

We find this so fascinating! And isn’t awesome to learn English with your favourite series? At ABA English we know how effective this method is, so our course is based on 144 cinematographic high quality short films that make learning entertaining and effective. Register and discover a new way to learn English.