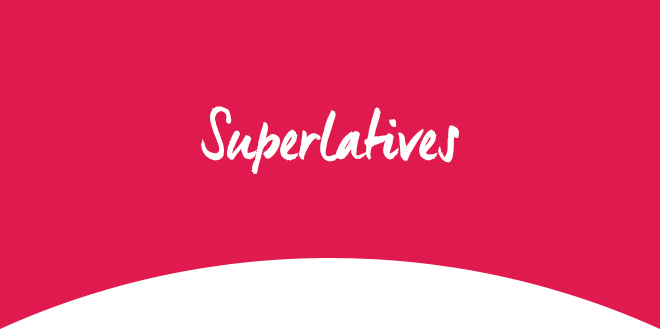 I know what you are thinking, ABA English is the best, the most exciting and the most enjoyable course you have ever done in your life! Right?

I certainly hope that is true. I also hope that you can see in the above sentence mentioning the qualities of ABA using the “superlative form”  to describe how a person may feel about your course.

“Superlative adjectives” are used to describe upper or lower limits of quality. They are used in sentences where a subject is compared to a group of objects or an object.

For example: The Cheetah is the fastest animal on the planet.

Max is the smartest boy in the class.

That is the smallest house I have ever seen!

Mount Everest is the highest mountain in the world.

Motor racing is the most dangerous sport on Earth.

Now let’s look at some of the rules you need to remember before using the “superlative” form.

For one syllable words add-est for the superlative.

He is the tallest boy in the school

She is the cutest baby I have ever seen.

For two syllable words form the superlative either by adding -est or by preceding the adjective   with most. Normally if you are unsure about which should be used then just stick with most as it is normally the most used form.

Michael has the busiest job in the whole market, he has to stock and count deliveries all day.

This is the most splendid holiday I have ever had.

The superlative is formed by adding most in front of the adjective.

A Game Ranger’s job is certainly the most dangerous job in Africa!

This is the most important day of my life please try to be supportive.

Remember that there are also irregular superlative adjectives, here is a short list of the most common ones.

I now know #superlatives thanks to @abaenglish