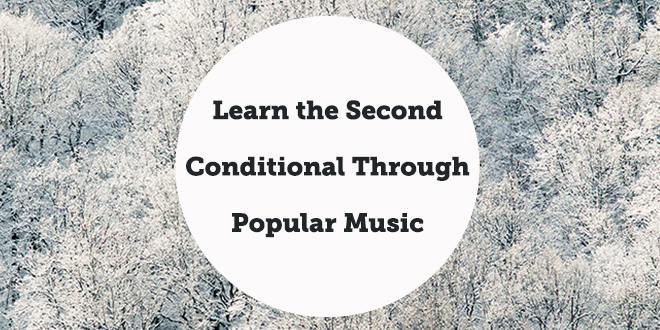 As Kate outlines in an earlier post, there are four grammar constructions for conditional statements—statements that use “if” to describe something that is possible or could be possible under certain conditions. These conditional forms are known as the zero, first, second, and third conditionals.

To review, the second conditional has the following pattern:

The second conditional deals with events that are possible, but not likely to happen. “If I got a huge scholarship, I could go to Harvard for free” would be one example of an unlikely event that’s described using the second conditional. An event like this is only somewhat unlikely—ordinary people do get full scholarships to Harvard every year, but it’s not very common. In other cases, a second conditional event can be so unlikely that it may as well be impossible. An example of this would be a statement like “If I had an invisibility cloak, I could really surprise my friends.”

Popular singers in the English-speaking world love to use the second conditional in their songs. This is because popular music is dramatic and often sad—songs are full of lyrics where singers hope for some amazing event, or desperately wish that something unlikely will happen.

Taylor Swift uses the second conditional in many of her songs, including hits such as “I’d Lie,” where she sings about not wanting to admit that she is attracted to a boy. Taylor discusses the unlikely event that someone might confront her about how she feels with the lyrics “If you asked me if I loved him, I’d lie.” Justin Bieber has similar lyrics in his songs as well. He even has a song that contains part of a second conditional statement right in the title. In his hit “I Would,” the opening lyrics make the full second conditional statement as Justin sings “If I could take away the pain and put a smile on your face… I would.”

And this use of second conditional isn’t limited just to modern pop stars who are popular with teens. Bands and singers that play to older audiences love the second conditional too. Adam Duritz of the Counting Crows sings out second conditional statements in hit songs of his such as “If I Could Give All my Love to You.” And Steven Page fantasizes about being rich in his popular song “If I Had a Million Dollars.” Cher expresses regret for past mistakes when she sings “If I could turn back time… I’d take back those words….” And the classic American folk group Peter, Mary, and Paul sings about making the world a better place through hard work in his song “If I Had a Hammer.”

I now know the 2nd conditional thanks to @magoosh and @abaenglish