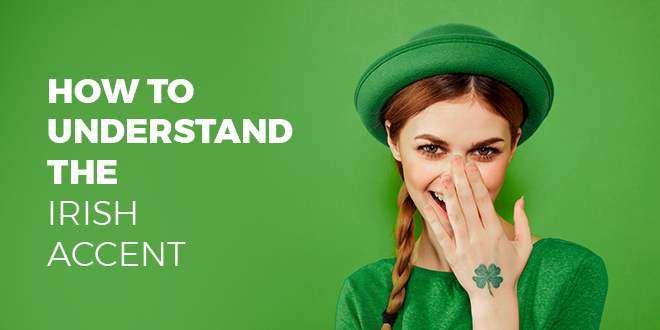 How to understand an Irish person

How is your English coming along? Do you understand most accents? What about the Irish one? Well, in actual fact, Ireland has a variation of accents like most English speaking countries, but the most common one is from the Dublin area even though there are slight variations in this area as well. Today we are going to look at how to understand certain expressions and the way Irish people pronounce certain words so that we can try to easily understand and identify an Irish person when we meet one.

What are common Irish expressions?

Ireland has a lot of funny expressions but to be honest, if you don’t know them then they would be rather hard to guess. Let’s look at a few and their meanings:

A crusty – A dirty/dishevelled person

The Garda – The police

To shift someone – To passionately kiss someone

To be bang on – To be absolutely correct

If you go to Dublin and start chatting to the locals, you are more than likely to hear these expressions in Irish English. Let’s look at an example sentence of what someone in a bar might say to you in Dublin.

Or in general English it would mean:

“Hey, how are you? What is happening?”

As we can see from the above example and its meaning in standard English, “what’s the craic?” can also mean “what is happening?” and not only refer to something being good or amusing. Learning the contexts in which words are used is highly important too.

How is Irish English pronounced/spoken?

As we mentioned previously, there are several variations of accents in Irish English, however we will look at the main distinctions in this version.

Generally “th” sounds like those which appear in the words “think” and “thought” are pronounced with only a “t” sound, making the “h” seem almost redundant. There are other instances where the “th” sound in the middle of words such as “mother” and “brother” changes to almost a “d” sound.

Look at the following couple of examples to see the general pronunciation in Southern Irish English:

As can be seen from the phonetic pronunciation in Irish English, the “th” of thick changes into a “t” sound, whereas the “th” sound of both brother and mother changed into a soft “d” sound. This is rather widespread in Irish English and something that should be paid attention to when learning this variation of the English language.

Other strong sounds that stand out in Irish English are the vowels, especially the letter “I” which in many words, almost joins with the letter “a” to create a whole new sound.

Like with most accents, this sound would more or less be the same across other words of a similar structure such as “mime”, “chime” and “crime” to name a few.

Is it hard to get used to Irish English then?

In our honest opinion here at ABA, we have to say that the Irish accent is one of the more challenging ones that you will come across when studying the English language, although not impossible. Adjusting to the variation of sounds from standardised British English along with the speed of speech of some people will most likely be the most challenging aspects as they are very different and some people can speak very fast,

Like most accents, it’s always easier to adjust yourself to the accent if you are constantly surrounded by it, but if that’s not an option, there are always great Irish TV shows like Father Ted to train your ear.

Learn about Irish English and accents with @abaenglish

ABA English english grammar how to understand an Irish person Irish accent in English Irish accents in English kinds of different English accents 2017-03-12
Share
Previous Brexit; How will it affect those who want to move there?
Next Past simple of modal verb “can”