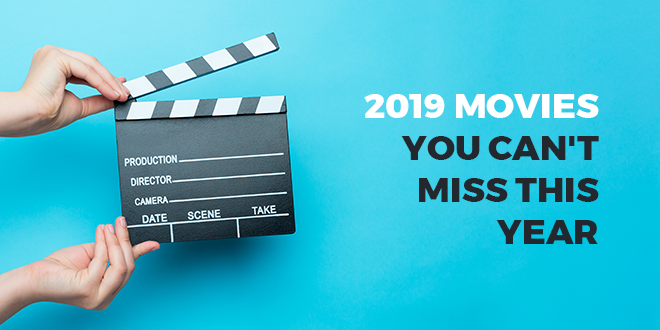 One of the most effective ways to improve your English is by watching movies in their original language with subtitles in your native tongue. In fact, watching movies allows for so-called implicit learning, that is, the unconscious acquisition of the words and grammatical structures of a language. Beyond that, you should not underestimate the playful aspect of cinema, its ability to entertain, to arouse emotions, and to amuse.

Find out what’s new in English movies in 2019 with @abaenglish.

If you are one of those who looks forward to the latest releases at the box office, read this article to discover some of the films that will be released in 2019 that you cannot miss out on. Next year will fall under the banner of American cinema! You could watch these movies in your native language at the cinema and then see them again, but this time in their original version with subtitles. This will allow your knowledge of the plot to help you better understand the dialogues and enjoy the movie.

You read that correctly. This film, by Jon Favreau, is the new version of the great Disney success of 1994 and will be in theatres beginning on 21 August 2019. Judging from the trailer, the film seems to be an almost exact adaptation of the previous version, but this time it was made with photorealistic computer images. In 2016, there was already talk of a new Lion King after the success of The Jungle Book remake by the same director. We hope that this production is also of excellent quality.

Godzilla II – King of the Monsters

This film from Michael Dougherty is the sequel to Godzilla (2014) and will be in theatres beginning on 30 May. The MONARCH agency will face a series of kaijū of mythical proportions: Godzilla, Mothra, Rodan, and the three-headed monster, King Ghidorah. The rebirth of these titanic monsters will put the fate of humanity in grave danger and keep you in suspense. While waiting for the premiere of the movie, why not watch the 2014 Godzilla movie in English?

The new film from Neil Marshal is the third to feature the superhero of the comic book of the same name. This director, in comparison with the previous productions from Guillermo del Toro, has decided to give a more mischievous tone to the story in addition to promising greater fidelity to the comics, a promise guaranteed by the presence of the creator Mike Mignola who was heavily involved in production. Hellboy, this time interpreted by David Harbor, will arrive in the UK to defeat Nimue, the lady of the lake and Merlin’s wife, played by Milla Jovovich. The results of this conflict could be decisive for the destiny of humanity. The film is expected to be in US theatres on 12 April while its release date in other countries is not yet known. To prepare, you can take a look at the two Guillermo del Toro films and practice your American accent a bit.

As a sequel to the two films Unbreakable (2000) and “Split” (2016), M. Night Shyamalan presents, along with the protagonists, Bruce Willis and James McAvoy, the entry of Sarah Paulson. David Dunn (Bruce Willis) tries to contain the destructive fury of Kevin Wendell Crumb (James McAvoy), known as “The Beast” who sowed terror in the zoo where he worked. During the story, “The Crystal Man” Elijah Price (Samuel L. Jackson) is revealed to be the true orchestrator of the plot and the destinies of both. The film will be available from 17 January.

This romantic comedy, directed by Todd Strauss-Schulson, is on the list of romantic films for Valentine’s Day. Tells the story of Nathalie, a cynical architect who lives in New York, played by Rebel Wilson. The life of the protagonist presents two major problems: the difficulty of being noticed by her boss and a problematic relationship with men who are frightened by her excessive cynicism. But everything changes when Nathalie meets a pickpocket named Blake (Liam Hemsworth). The film is perfect for incurable romantics who want to become acquainted with the New York accent.

This is the North American version of the French film Intouchables, directed by Neil Burger and which will be released in theatres on 12 September. Based on a true story and quite faithful to the 2011 film, it tells the story of an American millionaire who is paralyzed after an accident and who will rediscover the desire to live thanks to an unlikely friendship with his new assistant, a delinquent fresh out of prison and seeking redemption. If you liked the French version, then do not miss out on the American remake.

Ready for Your Movie Night?

Now you know what awaits you in theaters in 2019! Meanwhile, why not start with an online English course that knows how to combine grammatical accuracy with audio-visual stimuli? The ABA English course is based on short films that present situations from daily life to help you develop the necessary skills for daily communication in English. What are you waiting for?

OK, I want to try the course!
OK, I’m going to download the app!
2019-01-09
Share
Previous How to Communicate in a Spa in English
Next Communication Verbs in English: Talk, Speak, Tell, or Say?