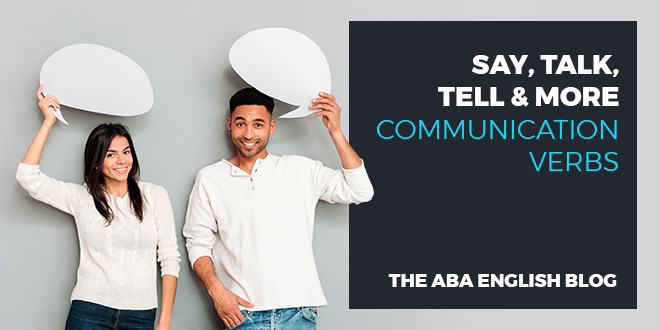 Are you among those who confuse the English verbs to tell, to speak, to talk, and to say? Do not panic! You should know, first of all, that this is one of the most frequent mistakes made by English students. What you need is to understand their differences and to do some practice exercises. Then your problem will be solved!

Discover how to use the verbs to speak, to talk, to tell, to say and more with @abaenglish.

Below, we will present a clear explanation of the different characteristics of these verbs together with other verbs that are used to express communication.

To tell is used to indicate that a piece of information is being transmitted to someone and, therefore, is always followed by the recipient of the information. In this case, the recipient is a direct object and is not introduced by a preposition. So, this verb has two direct objects: the object of discourse and the recipient. It is also an irregular verb which goes by the following rule: tell, told, told.

I told you I don’t like when you leave your shoes on the carpet!

Can you tell Judy I am going out around 4 pm?

Don’t worry, I won’t tell anybody.

She told everybody I am moving to Australia.

I always tell the truth to my friends.

The verb to tell is also used when the subject of discourse is not expressed.

Unlike to tell, this verb does not maintain the double direct object. Therefore, its direct object consists of the information to be transmitted and an indirect object (introduced by the preposition “to”) to indicate the recipient.

Please say hello to your parents for me.

In addition, the recipient of the message does not necessarily have to be present.

I always say thank you to waiters.

I said that the new year will be amazing.

This verb is also used to introduce direct speech.

“I always say thank you to waiters,” she said.

This verb is generally used in reference to the simple act of speaking a certain language and for univocal (non-conversational) communication. It is generally a verb that is easy to learn and to use correctly. The recipient of the speech can be introduced by the preposition with or to depending on the context.

I don’t speak with Mark anymore.

Do you speak English?

To talk is similar to the verb to speak, but is not used to refer to speaking a language. Rather, it is used to indicate a conversation and a communicative exchange. It has a more informal tone than to speak.

I don’t want to talk to you.

We need to talk about the situation.

Other Verbs for Communication

These are some of the verbs that are used most often to indicate communicative actions. Pay attention not only to the meaning of each verb but also to its syntactic construction.

I didn’t mention to you the reason for their delay.

Could you explain to me why I can’t solve this exercise?

I didn’t reveal to her the company’s strategy.

The manager highlighted the main points of the results of the market survey.

Training is an effective way to transmit information about global warming and its possible solutions.

Please convey my gratitude to your family.

Despite my efforts, I couldn’t convince him of my innocence.

The police want to discuss the recent events with the local people.

And now what else can we tell you? If you want to speak English correctly and to establish effective communication, why not take our online course? We offer 144 free video classes and the same number of short films to help you acquire the necessary skills to communicate in English in the different contexts of daily life. Do not say no!