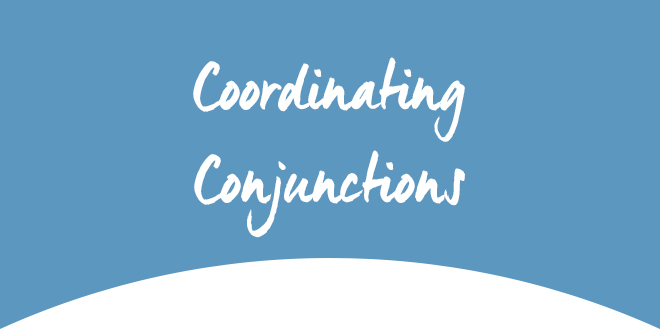 These conjunctions connect words, phrases and clauses. They are usually found in the middle of a sentence with a comma (,) just before the conjuction, or at the beginning of the sentence.

Example: “When I get home the dog is on the sofa and the cat is on the bed”

Example: “My hat’s great: it has flowers and a ribbon”

3. Connecting three or more items in a series.
This way is similar to number two. You separate the items with a comma, except the last.

Used to introduce a statement that explains why a preceding statement is true. Usually, we use “because” instead of “for”, however.
Example: “I know he went to the party, for I saw him there”

1 – Used to join words or groups of words.
Example: “My dog is black and white.

3 – Used to describe actions that occur at the same time.
Example: “They sat and waited for hours for the doctor to come”

4- Used to describe an action that occurs after another action.
Example: “Ok, we will travel for 3 hours and then stop to eat”

5- Used to describe an action that occurs after and is caused by another action.
Example: “I asked her to buy me some sweets and she did.

Used after a negative statement to introduce a related negative word or statement. It’s not often used on its own.
Example: “Laura didn’t eat her meat, nor did she want the vegetables”

1 – Used to introduce a statement that adds something to a previous statement and usually contrasts with it in some way
Example: “Gina doesn’t like James, but I do”

2 – Synonymous of  “other than”.
Example: “When the weather got worse we had no choice but to go home”

1 – used to introduce another choice or possibility
Example: “Would you like tea or coffee?”

2 – Used in negative statements to introduce something else that is also not true.
Example: “We couldn’t stop or get out of the taxi”

3 – Used to say what will happen if a specified thing is not done.
Example: “You have to go to the job interview or you won’t get a job”

4 – Used to introduce the reason why something said previously is true.
Example: “He must have passed the exam or he would be upset”

5 – Used to introduce a word or phrase that defines or explains what another word or phrase means.
Example: “Adiós, or in English goodbye, is what we say to each other when we’re leaving”

Used to introduce a statement that adds something to a previous statement and usually contrasts with it in some way.
Example: “My aunt designs high quality yet affordable clothes”

1 – For that reason : and therefore
Example: “The film was very bad, so we left after 10 minutes”

2 – Used to say the reason for something.
Example: “Please be quiet so everyone can read peacefully”

3 – Used in speech to introduce a statement or question.
Example: “So, finally we meet!”

See you soon for more!