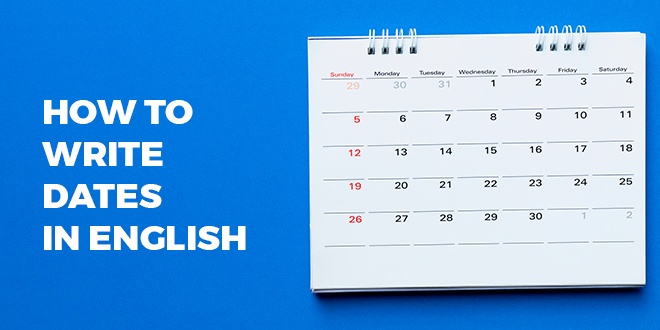 How to Write Dates in English | ABA English

How to Write Dates in English

Today we are going to refresh our memory and focus on the days of the week, months, and dates. We will also look at ordinal numbers, which are very useful to know when writing the date in English.

Learn to write the date in English with @abaenglish.

There are some elements that you should keep in mind when it comes to writing the date and its various possible formats. In many cases, the format depends on the country in which you are located. ABA English will explain everything you need to know in this article.

What we should be aware of when noting the days of the week is that, in English, they are ALWAYS CAPITALISED. That goes for months of the year, too.

In English, you will probably notice that some calendars start with Sunday instead of Monday, depending on the place, but it is important to note that both varieties are accepted.

How to Correctly Write the Date

Do you know how to write the date correctly in English? In English, it is important to remember that the date can be written in two ways and both are acceptable.

In other words, you have to be careful when you see dates like these written down as they could actually be interpreted differently depending on the country you are in.

Knowing how to express both the date and time in English is very important. The day/month format is known as the “British” format. This is the same as the general European format and is often used in other English-speaking countries like New Zealand and Australia.

The month/day format, which portrays the month first, is referred to as the “American” format. It is used 100% of the time in the United States and is also very prominent in Canada. By following these simple rules, you already know how to write the date in English.

Ordinal numbers are used in English to show position, ranking or order of numbers in relation to other numbers in a sequence, NOT quantity. These numbers are often used to write dates. Take a look at this example of how the date is written in a letter in English:

Ways to Write the Date

As you can see, in the previous example, ordinal numbers were used. Every number has a corresponding ordinal number which ends in one of the following suffixes: –st, -nd, -rd, and -th.

These can also be written in a different more abbreviated format with the number itself and the corresponding suffix.

With the remaining numbers, we always use the suffix -th.

And do not forget the three exceptions to the rule that we mentioned earlier:

Once you memorize these simple rules, it will be very easy to remember how the proper date format in English.

As explained, these are the main rules you must remember in order to use days, months, dates and ordinal numbers correctly. If you want to continue receiving useful tips, take a look at Unit 10 in the ABA English course, “The Question“.

The most popular Valentine’s Day phrases to express your love