Have you heard about this non-traditional way of learning English in China?

Li Yang, the creator of this method, believes that the best way to learn English is by practicing orally. And we completely agree!

So how does Li Yang teach his students? Well, they go out into big open spaces or on rooftops and shout out words and sentences. About 20 million people practice English this way, shouting vocabulary into the sky.

Li is very popular in China. In fact, before the Olympic games he went to Beijing to help the citizens learn as much English as possible for when the tourists arrived. He has taught classes of up to 10,000 people with each student paying $250 to participate. It is a very popular way of learning for the Chinese. Sometimes Li Yang even receives love letters!

One-sixth of the world’s population speaks Chinese, but the Chinese people know how important it is to know English so they can get better jobs and travel around the world. Watch the following video of how Li Yang and his teachers get everyone to practice the English language. What do you think of this method?

Li says that “shouting unleashes your international muscles“. Maybe you should re-read this post aloud at the top at the top of your voice!

Or download our free unit and practice your English pronunciation! 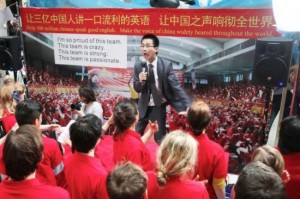 Method – (noun) a way of doing something.

Orally – (adverb) spoken rather than written.

Spaces – (noun) the amount of an area, room, surface, etc., that is empty or available for use.

Rooftops – (noun) the upper surface of a roof.

In fact – (adverb) used to stress that a statement is true although it may be surprising or unlikely.

Citizens – (noun) a person who lives in a particular place.

Love letters – (noun) A love letter is a romantic way to express feelings of love in written form.

Unleashes – (verb) to allow or cause (something very powerful) to happen suddenly.

Muscles – (noun) a body tissue that can contract and produce movement.