The peanut butter and jelly sandwich is an American staple of many children’s childhoods. It is typically a food used for snacks or lunch time. The food is as simple as it sounds– two pieces of bread with peanut butter on one slice and jelly on the other. The two slices of bread are  then put together.

In Australia, Canada, and the UK is it more commonly referred to as a peanut butter and JAM sandwich. Even so, the acroynym is still PB&J.

There are many variations to the sandwich. You can elaborate upon its simplicity by adding fruit such as bananas, another layer of bread, or even chocolate!

Have you ever had a peanut butter and jelly sandwich? Did you like it?

If you’ve never tried one, try making one at home! They’re very easy to make! Here’s a tip: Make sure to drink a large glass of milk with it. The peanut butter can stick to the roof of your mouth and milk does the best job at washing it down. 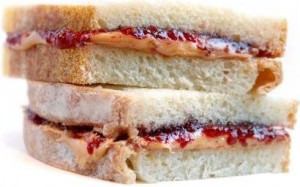 Snacks: (noun) a small amount of food eaten between meals.

Slice: (noun) a thin piece of food that is cut from something larger.

Acronym: (noun) a word formed from the first letters of each one of the words in a phrase.

Variations: (noun) a change in the form, position, condition, or amount of something.

Elaborate: (verb) to give more details about something : to discuss something more fully.

Layer: (noun) a covering piece of material or a part that lies over or under another