Cinco de Mayo (5th of May in Spanish) commemorates the day Mexico drove the French in Pueblo, Mexico in 1862.Interestingly, it is celebrated primarily in the United States and the city of Puebla in Mexico. Today, Cinco de Mayo is a day in which Americans of Mexican ancestry take pride in their heritage. Friends get together  to eat Mexican foods while drinking Mexican beverages. The city of Los Angeles, for example, celebrates Mexican culture with performances in the city center.

So why is a battle that was fought between Mexico and France being celebrated in the U.S.?

Slavery had been abolished in Mexico several decades before it was banned in the United States. The California constitution, written in both English and Spanish in 1849, declared itself a free state without slavery when it joined the United States.  California’s admittance into the Union as a free state did not make the southern states (those with slavery) very happy for it kept them from extending slavery across the U.S. to the Pacific Coast.

In 1861, United States fell into a civil war, bringing the issue of slavery into the forefront. The South, also known as the Confederacy, was trying to secede from the Union.  For Mexicans who had remained in California, the Confederacy seemed difficult to beat. So when news reached California of the Mexican victory over the French in Puebla, Mexicans in California were ecstatic.  A strong military had been defeated by the underdogs, giving them hope for the American Civil War that they were now a part of.

It is said that Mexican miners in California were so happy at the news that they ” spontaneously fired off rifles shots and fireworks, sang patriotic songs and made impromptu speeches.” It is believed that this is what has inspired the Cinco de Mayo celebrations that still occur across the U.S. today. 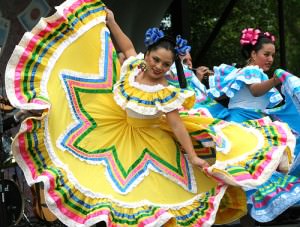 Commemorates – (verb) to exist or be done in order to remind people of (an important event or person from the past).

Drove – (verb) to move (people or animals) to or from a place by using force .

Ancestry – (noun) a person’s ancestors : the people who were in your family in past times.

Heritage – (noun) the traditions, achievements, beliefs, etc., that are part of the history of a group or nation — usually singular.

Beverages – (noun) something you can drink : a liquid for drinking.

Fought – (verb, past tense of “to fight”) to use weapons or physical force to try to hurt someone, to defeat an enemy, etc. : to struggle in battle or physical combat.

Abolished – (verb) to officially end or stop (something, such as a law) : to completely do away with (something).

Banned – (verb) to forbid people from using (something) : to say that something cannot be used or done.

Declared – (verb) to say or state (something) in an official or public way.

Secede – (verb) to separate from a nation or state and become independent.

Underdogs – (noun) a person, team, etc., that is expected to lose a contest or battle.

Spontaneously – (adj.) done or said in a natural and often sudden way and without a lot of thought or planning.

Impromptu –(adj.) not prepared ahead of time : made or done without preparation.