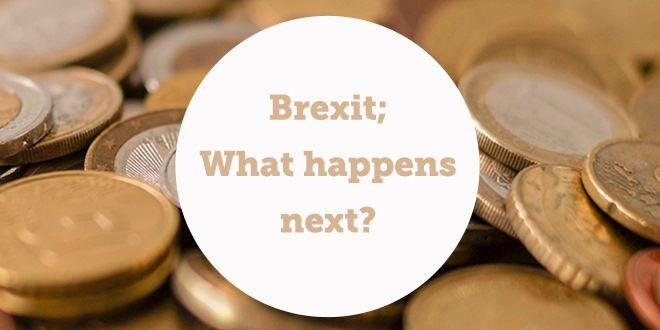 Brexit: What happens next?

On Friday the 24th June the United Kingdom (UK) and the world for that matter, woke up to a result that they were not expecting; the UK had voted to leave the European Union (EU) by 52% to 48%. Many people are now worried about what is going to happen, especially EU nationals living in Britain via the free travel arrangements and Britons living in Europe by the same means.

What are the next steps?

In order to start any means of leaving the EU, the UK would have to put the wheels of Article 50 in motion whereby they would then have 2 years of negotiations to sort out the leaving arrangements. There is only one problem however- nobody wants to trigger Article 50 and have that responsibility.

What is going to happen to Scotland?

Scotland, unlike England and Wales, overwhelmingly voted to remain part of the EU by 62% in favour of remaining to 38% in favour of leaving. What does this mean though? Nicola Sturgeon- Scotland’s First Minister and leader of the Scottish National Party (SNP) has said that she is going to be meeting with European leaders immediately in order to try to secure Scotland’s position within the European Union. Other European nations- like Spain for example which has its own autonomous and independence movements could be unhappy for Scotland to remain without having to rejoin as this would effectively open the door to its own regions to do the same.

What about the British living in Europe and vise-versa?

Politicians have been trying to assure us that the Brexit process is not going to happen for a good while but many people have already started to worry about their own future as there is now uncertainty about where they can live and work legally. Will all the European nationals already in the UK be allowed to stay? Will the UK’s immigrants be allowed to stay in Europe? These are very difficult topics indeed that right now, it appears, nobody has an answer for.

Where do we go from here?

From here, we have to wait for more developments, but either way it is going to make for interesting reading. Who is going to trigger Article 50? Who will be David Cameron’s successor? Will Scotland become an independent country and stay within Europe? Nobody really has the answers yet but one thing we should note is that, either way, it’s going to be an interesting, nail biting process.

Article 50 – The legal process that became law in 2007 whereby a country starts the process of leaving the EU.

To trigger – To do something which then starts another process.

Nail-biting – Something which is tense that causes you to bite your nails with worry.

Tell @abaenglish what you think about the #brexit result