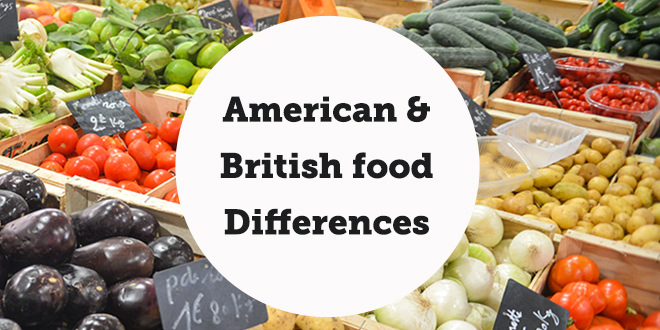 English can often be complicated enough without have to complicate things any more, right? You know us, we love to make things complicated for absolutely no reason whatsoever and we have gone and done it again with foods.

There are different ideas as to why this food has more than one name, although it is believed that the British call it aubergine due to the French who adapted it from Catalan and Spanish after the Arab conquering many moons ago.

Again, why are there 2 words for the same food? It is speculated that the American word comes from the Dutch word “koekje” which could have been due to Dutch colonisation many moons ago.

Why may there be differences in this instance? It can be assumed that the British say “rocket” due to their close proximity to France where the word is “roquette”. Americans on the other hand like to use the Italian word “arugula” almost as if to maintain its heritage. Fair play to the Americans on this one.

With this vegetable, the word used by the British- “courgette”, is of French origin and is actively used in the New Zealand, South Africa and obviously France. On the other hand, “zucchini” comes from the Italian word “zucchino” which means small squash. This word is common used in large English speaking areas including the United States, Canada and Australia.

Which one is correct?

Both of them are! As we can see, the English language is full of variety and at times throughout its development, has been heavily influenced by many other languages including French and Italian to name but a few. There are many more differences that we haven’t had the chance to talk about today but if you know any more, we would love you to tell us about them!

Tell @abaenglish if you know any more food differences