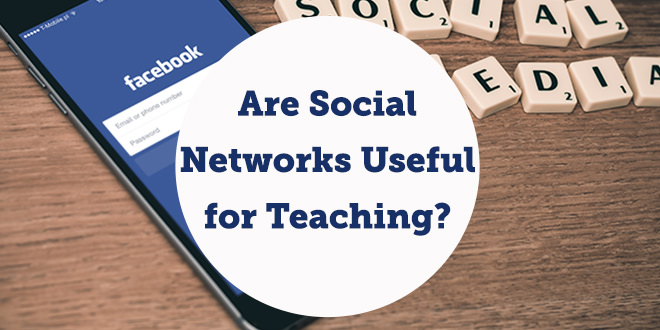 Are social networks useful for teaching?

Learning English has come a long way even just in the last 6 or 7 years. Nowadays we have many different social networks which have been utilised as platforms on which to teach English. Perhaps you have a favourite? Today we are going to take a look and see how social networks can help us improve our level of English.

Where does the biggest social network come in?

The most famous social network by far has to be Facebook. Since its inauguration over a decade ago, it has amassed a huge following with well over half a billion people using it to communicate with their friends. Facebook is very useful indeed for learning English. Very recently it launched the live streaming function which allows people the opportunity to stream themselves live to their friends. This is useful because it allows English teaching companies the chance to stream live classes to their students encouraging active engagement via the internet. Facebook is bringing the classroom to your mobile phone or laptop. In addition to this, the infinite amount of resources you can find on Facebook is a great tool which helps you study.

Instagram, a photo sharing platform, can be very useful too for those who perhaps learn better with imagery as opposed to just looking at words over and over. It allows the student the opportunity to see vocabulary written down next to the object which it is describing, allowing people to study and visualise that way. In addition to photos, Instagram also offers people the opportunity to post videos. That is to say that if English language companies want to give a video class, although not live, they also have this very good option.

Can we consider WhatsApp to be of use?

Whatsapp isn’t a social media network in the same way as we would categorise Facebook, Twitter and Instagram. It is in fact a mobile messaging application which has taken off and is doing really well. This comes into play in English language learning due to the fact that it makes it possible for students to chat to and ask their teachers questions outside of the class environment for free.

Finally another major player in the social media world is Twitter. We couldn’t write a blog post about social networks without mentioning Twitter. After launching in March of 2006, Twitter gives its users 140 characters per tweet in which they can explain whatever it is that they are saying with the characters. This is useful as it allows people to explain easy pieces of grammar to the point. In addition, if some explanation is too short then a photo can be added to the tweet to carry on the explanation so that users or people who are studying can get the full explanation along with a visual aid.

So, are social networks the way forward in online learning?

After discussing social media, It appears that the overwhelming benefits of it on language teaching always leave a positive outcome. Not only does it make language learning more accessible by providing a lot of content but actually also makes it more economical because there is a lot of competition in the online market. If learning English is your goal, you can sign up for free with ABA English and we will help you on your journey.

Tell @abaenglish if you use social networks to study!