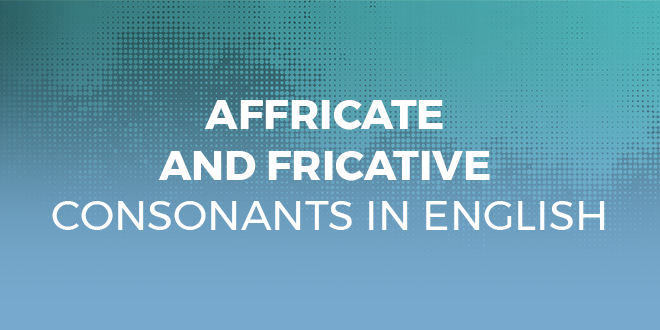 Affricates: What Are They and How Do You Pronounce Them?

Affricates: What Are They and How Do You Pronounce Them?

When learning a language, one of the most frustrating parts to get correct is the pronunciation. This is true whether you are in an online English course or in an in-person course. Since every language has its own quirks and special rules, it is easy to get overwhelmed.

But, if you want to communicate clearly and without fear in English, learning some special rules for pronunciation is a good idea.

Improve your English pronunciation with @abaenglish.

For that reason, we have written this article about two of the trickiest types of consonants to pronounce in English: fricatives and affricates. Vowels in English are in a field of their own.

Once you have practised some of these words and know where in the mouth they are created, it will be easier to say new words, to help you communicate clearly and with less stress. Read on to learn more!

Fricatives and affricates are two types of consonants that are characterized by the articulation of their pronunciation.

The main difference is that while the fricative is pronounced through the narrowing of some parts of the vocal tract, the affricates are a complex consonant that begins with an occlusive phase before moving on to a fricative phase.

To see the difference clearly, put your fingers on the front of your throat when pronouncing the examples below. When making a voiced sound, you will feel a vibration in your throat. For a voiceless consonant, you should feel nothing.

Now, to better understand the differences between fricatives and affricates, as well as how they are pronounced, let’s look at them in detail.

Fricatives are consonants produced when air passes through a narrow channel between two articulators.

One particular type of fricatives are sibilants in which the tongue moves longitudinally to cause air to pass over the edge of the teeth and create a hissing sound.

In English, the sibilants are /s/, /z/, /ʃ/, and /ʒ/. In addition, fricatives can be labiodental, dental, alveolar, alveolo-palatal, and glottal.

Here is a list of the fricatives in modern English, organized by their manner of pronunciation.

These fricatives are made using the lower lip and the upper teeth.

The tip of the tongue against the teeth creates these fricatives.

For these fricatives, the tip of the tongue moves up against the gum line behind your upper teeth.

For the final category of fricatives, the back of the tongue moves up against the gum line behind your upper teeth.

In English, there are only two affricate consonants: /tʃ/ and /dʒ/. Both of these sounds are alveolo-palatal sibilants.

Make them by beginning with the tip of your tongue against the back of your top teeth, stopping any air from flowing out of your mouth. Then, move your tongue back to behind the alveolar ridge to release the air.

The affricates are a little more complex to pronounce. In fact, their pronunciation is divided into two phases starting with an interruption in the passage of air followed by a fricative sound.

The best way to practise the pronunciation of these consonants is to listen to them being pronounced and then repeat the sound, recording yourself if possible so that you can check your pronunciation afterwards.

Once you have mastered the example words for each of the consonants above, try saying the phrases below. They contain a good mix of fricatives and affricates to keep your tongue busy. The final step is to take an English level test to see how your English is advancing!

My wedding dress is azure.

The goldfinch is called this because it feeds on thistle seeds.

In Spain, it’s too hot in the summer.

It was a matter of vital importance.

John is not feeling well.

I love sipping my coffee.

Yesterday, the shore was beautiful at sunset.

Mary is a girl full of energy and joy.

This bag is made in China.

Oranges are my favourite fruit.

We spent the whole afternoon on the beach.

Now that you know how to pronounce the fricative and affricate consonants, you have an additional skill to make your English pronunciation impeccable. If you are thinking of taking an English course, why not try ABA English?

With our natural and intuitive method, you will easily learn the correct pronunciation of English thanks to the didactic units developed from short films in English. Why not start now?