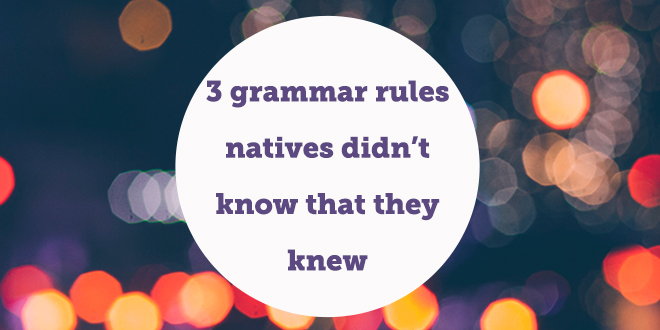 Have you ever thought about grammar rules in your own language and knew everything about them? Probably not. Native English speakers are quick to defend their language when something is said that doesn’t sound too right, but many native speakers are not up to scratch with their English grammar.

In today’s blog post we are going to focus on explaining a few aspects of the English language, including grammar, that we are convinced a native speaker wouldn’t know the ins and outs of. Get ready to be amazed.

If you haven’t heard of this before then don’t stress! In fact, there is a large number of native English speakers who have never even heard of this as well and who would be very puzzled if questioned about it.

So, what is it? It’s a series of different symbols where each one corresponds to a specific sound from the English language. People may question how useful this is but in actual fact it has a very good purpose. Natives of other languages learning English learn this at the start which really helps them when it comes to pronouncing words in English. It is surprising that natives generally don’t know the phonemic script but that comes down to the fact that native speakers tend to know the sounds through being exposed to them when learning to speak and automatically know them, therefore never having the need to learn it.

These are just a few of the symbols that exist and the sounds that they represent but it is important to know them all if you are learning English to help your spelling and pronunciation improve.

This is most certainly a rule in English that native speakers know but don’t actually realise that they know. A native speaker knows that they can say “a big brown horse” but not “a brown big horse” but they are most likely unable to inform you as to why this is the case.

This order is also known by its acronym OSACOMP and unbeknown to native English speakers, they enforce this rule naturally every time they are referring to an object and using many adjectives to describe it at once.

These examples follow the OSACOMP rule and if the order of the adjectives were changed, it would be incorrect. This for natives speakers comes naturally even though they are not necessarily aware of the order but can be somewhat tricky for non-natives learning the language.

Native English speakers tend to use these correctly in speech but are not actually aware of the grammar rule which distinguishes them. In actual fact, there is not too much of a difference, however it is argued that grammatically speaking, “may” should be used in the present tense with “might” used to refer to a past action.

He may go to the cinema after work, but I’m not sure.

They may stay longer depending on what their boss says.

She may choose to buy the sofa today.

He might have gone straight home after the party.

They might have bought the cake straight before they came to the party.

She might have finished her homework just before she left for school.

As little as the difference seems, native speakers seem to manoeuvre this pretty well without being able to determine exactly why.

What is the ideal way to practise these grammar points?

As for the OSACOMP rule, it will take a lot of practice to perfect this when listing adjectives as this is a complicated and rather intricate structure but one which certainly can be achieved. As for “may” and “might”, it is just a case of knowing which tense you are speaking in so that you can choose appropriately.

english grammar grammar rules you didn't know existed 2016-11-03
Share
Previous Present perfect with “since”, “for” and “just”
Next Reported speech