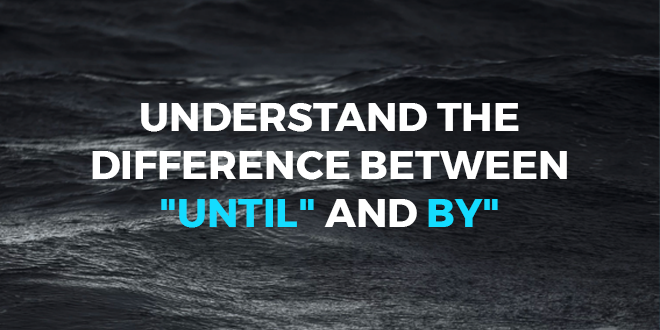 Understanding the Differences Between Until and By

The most common mistakes made by those who are learning English are often related to preposition use. This is due to the fact that people tend to literally translate words and phrases from their own language. When it comes to English prepositions, there are several exceptions and uses that may not correspond with their use in your mother tongue. Therefore, it is good to understand how to use English prepositions according to the context of the sentence. Today, we will take a look at two prepositions that are often confused: by and until.

The English prepositions until and by explained by @abaenglish.

Both by and until express a concept of time. In particular, they are used to introduce actions or events that take place within a certain period of time. What are the differences between them? Let’s look at both in detail and clarify any doubts with some examples.

Until is used to refer to an action that lasts up until a certain moment. With this preposition, the emphasis is placed on the action and its duration until a fixed time.

We lived in that flat until last December.

Let’s wait until it stops raining.

I worked until 8 pm.

Until is also used in negative sentences.

Details will not be available until the end of February.

You are not going out until you have finished your homework.

On the other hand, by puts the emphasis on the moment the action ends rather than its duration. It does not express any concept of the duration of the action or event.

I need to return my book to the library by the end of June.

By is also used in interrogative sentences.

Will you be able to complete the work by the end of this semester?

To better understand the differences between them, let’s look at a direct comparison of the two prepositions.

This is a very popular expression used to indicate that one event has already ended when another occurs.

By the time we arrived at the supermarket, it had closed already.

By the time we arrive at the supermarket, it will be closed already.

To learn how to use these prepositions correctly, practice is required, along with precise, clear, and complete study materials. The English course offered by ABA English has been designed to guarantee a method of regular study that will allow you to learn the English you need for daily communication without neglecting either the accuracy or integrity of the information. It is made up of 144 free video classes based on short films inspired by real-life situations in addition to offering support from qualified native teachers who are ready to answer your questions.

OK, I want to see a video class!
OK, I am going to download the app!
2019-02-16
Share
Previous How to Flirt in English
Next 8 expressions to describe your mood in English