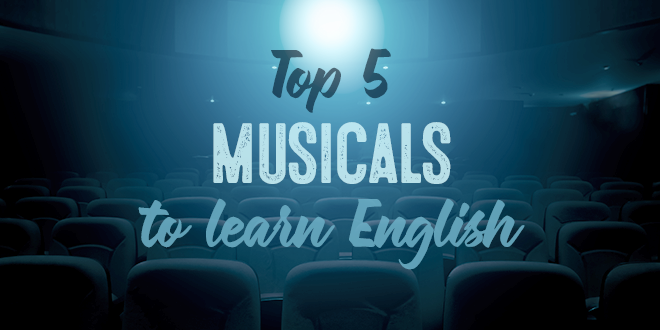 Learning English from musicals? Precisely, they are far more suitable than you may imagine. It’s often said that you learn best by watching or listening, for example your favorite films or songs.

Songs make a bigger impression on us thanks to their tunes, and we can sing along to most of them after just a short while. Having said that, most of us struggle to understand individual words or the context.

Films make that so much simpler. Due to the fact that we can follow the events, and grasp the gestures and facial expressions of the actors, even if we don’t pick up on every single word, it is easier to understand the context.

Learning English through musicals is fun with @ABAEnglish

It’s therefore reasonable to assume that we should take a closer look at musicals because they combine both these factors. On the whole the songs go with the scenes, and so there’s no difficulty in understanding what it’s all about. Moreover, most of the songs in musicals have very catchy tunes, which means that learning vocabulary is as simple as ABC!

Let’s begin with one of the classic oldies. West Side Story was staged on Broadway back in 1957, but it was the film version of 1961 that really took off. In case you can’t remember, it’s about a young love affair between Tony and Maria.  However, there’s a problem: Tony is a member of the Jets and Maria is the sister of the leader of the Sharks. The Jets have been in New York since the year one and are laboring class, whereas the Sharks represent the immigrants from Puerto Rico. Jazz, pop and Latin American music accompanies the story of both rival gangs.

You might have thought that this musical might not be suitable for learning English, however, the Sharks are particularly easy to understand because they speak very clearly, even if they roll their Rs a bit more than usual 😉

Grease is another classic from the USA. It was performed for the first time in 1971 in Chicago and we are all familiar with the 1978 film version starring John Travolta and Olivia Newton-John. It’s a complicated High School love story between shy Sandy and Danny, the leader of the Burger Palace Boys.  The teenage romance is interspersed with rock and roll songs, which have now gained cult status. It’s precisely the music which has made this musical a popular favorite, familiar to young and old alike.

Grease is particularly suited to beginners of English because it deals with fairly straightforward issues.

We haven’t forgotten about your British accent! Did you know that Cats by Andrew Lloyd Webber is based on a series of feline poems by T.S. Eliot, which are very popular in England? Webber wove these poems together to make a story. It’s about a group of cats who gather at the salvage yard for the annual Jellicle Ball, where one of these cats acquires a second life. That’s why they all go the extra mile and show off all their wishes, strengths and plans. The musical was first performed in 1981 in London and since then it has enthused audiences in 26 different countries, 300 cities and in 10 different languages. It goes without saying that we recommend the English version.

The Phantom of the Opera

Another Andrew Lloyd Webber and Cameron Mackintosh classic, based on the novel by Gaston Leroux, which premiered in 1988 in London, went straight from there to Broadway and was made into a film in 2004. This play takes us back to the Paris opera of the 1880s. The so-called phantom is a disfigured man, who hides his face behind a mask and lives in the catacombs of the opera house. Peculiar things start to happen when he falls in love with Christine, a young ballet dancer. If you are one of those who likes to be thrilled, this is just the ticket!

Rent by Jonathan Larson is normally classed among those more recent musicals, but it has risen to the fore nonetheless. It made its debut in 1996 on Broadway, had already been filmed by 2005, and both versions proved a big success. The play is based on Puccini’s opera, La Bohème. It all begins with two young New York artists who are no longer able to pay their rent. Topics such as drugs, homosexuality, trans sexuality and AIDS are touched on in the course of the play, to which Larson brings much personal experience. It seeks to convey the idea that it pays to carry on in the face of adversity.

Indie and rock music form the backdrop, which is unusual for musicals, but this music blends with the production perfectly.

Well, have you now decided which musical you will pick to kick start your English lessons? If you know of other examples, feel free to add to the top 5 list in the comment section.

If you want to brush up on your English before the show, register with ABA English. What are you waiting for?