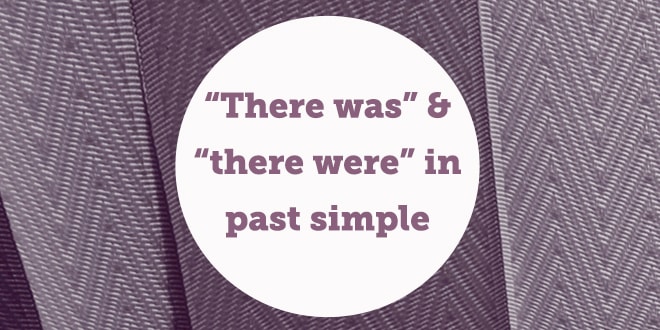 “There was” and “there were” in past simple

We are sure you love learning English so we always want to make it interesting and useful for you. In today’s post we are going to look at the past simple form of the present tense expressions “there is” and “there are”.

How do we express “there is” and “there are” in past?

Let’s start with “there is” which we use for a singular object in the present tense. To say this in the past simple tense we use “there was”.

There was a fire in the town centre.

There was something about it on the TV news.

When we are referring to plural objects in the present tense we say “there are”, however to express this in the past simple tense we use “there were”.

There were fire engines and police cars everywhere.

There were ten people injured and there was a lot of building damage.

Now that we have seen examples of “there was” and there were” in affirmative in past simple, it’s now time to look at how we form them in the negative. To do this we simply add the word “not” after the conjugated part of the verb “to be” or in this case, after the words “was” or “were”.

There was not (There wasn’t)

There were not (There weren’t)

There weren’t any eggs for breakfast this morning.

There wasn’t any sugar for my coffee.

There wasn’t any money in the kitty.

There wasn’t anybody to talk to.

There weren’t any new ideas in that conference

How to form questions with “there was” and “there were”

Q: Was there any bread left?

A: Yes there was / No there there wasn’t.

Q: Were there any biscuits in the tin?

Question tags with “there was” and “there were”

First of all, let’s remind ourselves why we use question tags in English. We use them because we want the interlocutor to confirm what we are saying.

There was a good film on TV last night, wasn’t there?

There wasn’t any time to have a meeting, was there?

There were a lot of people here today, weren’t there?

There weren’t any letter for me this morning, were there?

This grammar point is not the most difficult part of English grammar, although like all grammar points, until memorised and used well without thinking, there will be challenges. Don’t panic and just learn as much as you can at a steady pace and you will achieve your goal. Remember if you would like more information on “there was” and “there were” in past simple, you can check out unit 64 of the complete ABA course.