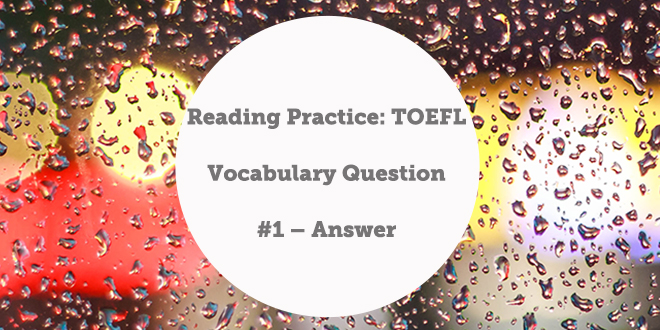 BY RACHEL KAPELKE-DALE ON FEBRUARY 11, 2016 IN READING, READING PRACTICE

The best way to get a high score on the TOEFL isn’t by cramming, but rather by making thoughtful and steady progress towards your goals. With this in mind, we’ll be going through a series of reading questions centered around one particular passage. Today, we’re looking at Caravaggio.

Italian painter Michelangelo Merisi da Caravaggio (1571-1610), usually known simply as “Caravaggio,” had a dramatic life, of which parts remain mysterious to scholars even today. Why, then, would it be a surprise that mysteries also surround his work? For example, The Taking of Christ, one of his paintings that had been considered lost since the eighteenth century, was rediscovered in 1990. It had hung, seemingly unrecognized, in the dining room of the Society of the Jesuits in Dublin, Ireland, for more than fifty years. The discovery that the painting was, indeed, a Caravaggio, led many to wonder how such a could be hidden—seemingly in plain sight.

The first clue historians have about The Taking of Christ is in the 1603 accounts of an Italian nobleman, Ciriaco Mattei, who paid 125 “scudi” for “a painting with its frame of Christ taken in the garden.” At the time, Caravaggio’s style, with its striking use of light and dark, was admired and often imitated by both students and fellow artists. However, trends in the art world come and go, and two centuries later, Caravaggio’s work had fallen out of favor with collectors. In fact, it wouldn’t be until the 1950s that a Caravaggio “renaissance” occurred, and interest in the artist was renewed.

In the meantime, The Taking of Christ had traveled far and wide. Ironically, it was the Mattei family itself that originally misidentified the work, though several centuries after the original purchase. In 1802, the family sold it as a Honthorst to a Scottish collector. This collector kept it in his home until his death in 1921. By 1921, The Taking of Christ—now firmly attributed to Gerard van Honthorst—was auctioned off in Edinburgh for eight guineas. This would have probably been a fair price if the work had been a van Honthorst; for a true Caravaggio, though, it was the bargain of the century. An Irish doctor bought the painting and donated it to the Dublin Jesuit Society the following decade.

From the 1930s onward, The Taking of Christ hung in the offices of the Dublin Jesuits. However, the Jesuits, who had a number of old paintings in their possession, decided to bring in a conservator to discuss restoring them in the early 1990s. Sergio Benedetti, the Senior Conservator at the National Gallery of Ireland, went to the building to examine the paintings and oversee their restoration. Decades of dirt, including smoke from the fireplace above which it hung, had to be removed from the painting before Benedetti began to suspect that the painting was not a copy of the original, but the original itself.

Two graduate students from the University of Rome, Francesca Cappelletti and Laura Testa, were primarily responsible for verifying that Caravaggio did, in fact, create this version of the painting. Over years of research, they found the 1603 Mattei accounts. The verification of the painting, though, went far beyond this circumstantial evidence. Certifying that a painting came from a certain artist’s hand is not easy, though forensic science that wouldn’t have been available in the 1920s helped to attribute the work to Caravaggio definitively. The canvas underwent a number of treatments. It was X-rayed and scanned with an infrared light. The cracks on the surface of the painting (known in the industry as “craquelure”) were studied. Furthermore, The Taking of Christ underwent much analysis by art historians, who studied the form and color in the painting to determine its authenticity. For example, Caravaggio never used sketches to set up the composition of his paintings. Instead, he made marks with the end of his brush as he painted—marks that can still be visible today.

Of course, the verification of the painting required entire teams of people, in addition to the three mentioned above, and took years. By 1993, the announcement was finally made that the long-lost Caravaggio had been found. Rather than sell the painting, which is most likely worth millions of dollars, the Jesuits decided to make it available to the nation of Ireland for viewing. Thus, the painting is on “indefinite loan” to the National Gallery of Ireland. Nevertheless, the painting continues its travels as it features in exhibitions around the world, from the United States to Amsterdam. In 2010, it even travelled back to Rome to be displayed for the 400th anniversary of the painter’s death. A fitting tribute, many would say, to a mysterious master.

The word “treasure” in paragraph one is closest in meaning to

To select the correct answer for TOEFL vocabulary questions, make sure that you study the context around the sentence. Here, looking over paragraph 1, we can pull out the sentence containing our term: The discovery that the painting was, indeed, a Caravaggio, led many to wonder how such a could be hidden—seemingly in plain sight.”

It can be helpful to come up with your own definition of the right term, even if it’s not perfect, before going over the answer choices. Here, you might guess something along the lines of “expensive artwork” or even “good thing.” Basically, something amazing was hiding in plain sight!

Then, scan the answer choices to see which one makes the most sense in this context. Here, “valuable” is the closest we have to a synonym, so (a) is correct. (Note that “valuable,” though often used as an adjective, can also be a noun.)

Why not the other answers?

You can double-check your answer by plugging it back into the sentence and seeing if the sentence still makes sense. “The discovery that the painting was, indeed, a Caravaggio, led many to wonder how such a valuable could be hidden—seemingly in plain sight.” Makes sense! Now, let’s try that with the other answer choices. You’ll notice that (b) and (d) are negative, which doesn’t make sense in this context, while “treat” has an entirely different meaning, usually meaning “entertainment,” “diversion,” or even “sweet”!

How can I use this practice in my test-day strategy?

Vocabulary questions are some of the most common questions on the TOEFL. You’ll come across about three per passage, but there can be as many as five. You want to watch out for words that make sense in the context of the passage, but aren’t definitions of the word being tested.