It’s time for the next chapter of “The Decision”, a novel premiering at ABA English.

“We should be on the same side, Mike”.

“Please, Mike, don’t make me threaten you. It’s a very absurd way of solving this problem”.

Mike had no idea what she meant. He was 25 kg heavier and at least 25 centimetres taller than her, and yet it was she who was making the threats. He stayed where he was, watching her. They were about three or four metres apart.

He couldn’t explain where the certainty came from, but he had a sudden premonition by seeing the woman’s face that she was carrying a gun and that in about five seconds, she would be pointing it at her head. 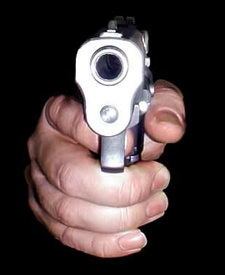 Daring – willing to do dangerous or difficult things.

Role – a part that someone or something has in a particular activity or situation.

Threaten – to say that you will harm someone or do something unpleasant or unwanted especially in order to make someone do what you want.

Premonition – a feeling or belief that something is going to happen when there is no definite reason to believe it will.

So exciting! Don’t forget to come by next Wednesday for chapter 11!