Learn English with the News: Try Something New for 30 Days

The following video is for intermediate and advanced students; the speed of the speaker and the vocabulary used is relatively harder than our usual videos. The video has subtitles to help you understand if you need it.

Matt Cutts works for Google and in this speech he talks about trying something new for 30 days.  It’s a great way to set new objectives in your life. They don’t all have to be serious, it’s about slowly improving and developing new skills.

A few years ago, I felt like I was stuck in a rut, so I decided to follow in the footsteps of the great American philosopher, Morgan Spurlock, and try something new for 30 days. The idea is actually pretty simple. Think about something you’ve always wanted to add to your life and try it for the next 30 days. It turns out, 30 days is just about the right amount of time to add a new habit or subtract a habit – like watching the news – from your life.

There’s a few things I learned while doing these 30-day challenges.The first was, instead of the months flying by, forgotten, the time was much more memorable. This was part of a challenge I did to take a picture every day for a month. And I remember exactly where I was and what I was doing that day. I also noticed that as I started to do more and harder 30-day challenges, my self-confidence grew. I went from desk-dwelling computer nerd to the kind of guy who bikes to work – for fun. Even last year, I ended up hiking up Mt. Kilimanjaro, the highest mountain in Africa. I would never have been that adventurous before I started my 30-day challenges.

I also figured out that if you really want something badly enough, you can do anything for 30 days.Have you ever wanted to write a novel? Every November, tens of thousands of people try to write their own 50,000-word novel from scratch in 30 days. It turns out, all you have to do is write 1,667 words a day for a month. So I did. By the way, the secret is not to go to sleep until you’ve written your words for the day. You might be sleep-deprived, but you’ll finish your novel. Now is my book the next great American novel? No. I wrote it in a month. It’s awful. But for the rest of my life, if I meet John Hodgman at a TED party, I don’t have to say, “I’m a computer scientist.” No, no, if I want to, I can say, “I’m a novelist.”

So here’s one last thing I’d like to mention. I learned that when I made small, sustainable changes, things I could keep doing, they were more likely to stick. There’s nothing wrong with big, crazy challenges. In fact, they’re a ton of fun. But they’re less likely to stick. When I gave up sugar for 30 days, day 31 looked like this.

So here’s my question to you: What are you waiting for? I guarantee you the next 30 days are going to pass whether you like it or not, so why not think about something you have always wanted to try and give it a shot for the next 30 days. 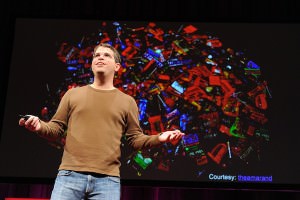 Stuck in a rut – a situation or way of behaving that does not change.
Example: “Last year I was stuck in a rut; I hated my job and didn’t like my flat. So to get out of the rut I sold everything and went to Australia”

Follow in the footsteps – to do the same things that another person has done before.
Example: “Paul follows in his father’s footsteps to become a lawyer”

Amount – a quantity of something.
Example: “The amount of time Helen spends watching TV is ridiculous”

Challenges – a difficult task or problem : something that is hard to do.
Example: “It was a challenge to run the 20km marathon but he’s so happy he did it!”

Desk-dwelling – The verb to dwell means to live, dwelling is the place a person lives. In this case Matt says he dwells at his desk. Because he works with computers he spends all day sitting at his desk.

Hiking – to walk a long distance especially for pleasure or exercise.
Example: “My brother loves hiking in the Alps, near Switzerland.

Novel – a long written story usually about imaginary characters and events.
Example: “The Lord of the Rings is a fantastic novel”

Scratch – from a point at which nothing has been done yet.
Example: “Tina made the cake from scratch”

Sleep-depriver – to not have enough time to sleep.
Example: “Ben worked every day from 7 o’clock in the morning until past 11 o’clock at night. He was sleep-deprived in the end”

Mention – to talk about, write about, or refer to (something or someone) especially in a brief way.
Example: “Rob mentioned he’d been to Paris, I didn’t know he had been there”

Sustainable – involving methods that do not completely use up or destroy natural resources.
Example: “This rythm of exercise is sustainable because I’m not too tired but it’s a good work out”

Stick to it– to continue doing or using (something) especially when it is difficult to do so.
Example: “If you want to succeed, you have to stick to it!”

Give it a shot – an attempt to do something successfully.
Example: “Karina didn’t think she would get the job, but I told her to give it a shot”

If you enjoyed this video and would like to watch more, visit the TED website. Most of the videos have subtitles in over 50 languages.