What was your favourite toy when you were young?

Learn about these special playground toys in today’s news:

The rocking horse has entertained children for generations – but this modern-day steed is something special. Not only does it light up as a child rocks, the lights are powered by the kinetic energy the children produce.

Concerned that kids are spending too much time in front of computer games, the developers of the Lumi are determined to get them back into the playground. And they are using the energy created by the children to do it. Ilian Milinov is from Bulgarian company Playground Energy, the inventors of the Lumi.

– We have to bring this outdoor classic playground in 21st century. That is why we transform this kinetic energy spent from kids on the playgrounds into light, sound in order to motivate them, to stimulate them to play more in playgrounds.

By hooking the toys up to a central hub, the children can compete against each other, just like when playing computer games – the lights and sounds showing who is producing the most energy, the fastest.

– I think the energy I would produce will not be enormous, but still enough!

And one parent, Ralitsa, jokes that she has long been aware of the kinetic capabilities of her offspring.

– The bursts of energy from them could easily power a household, I am sure. 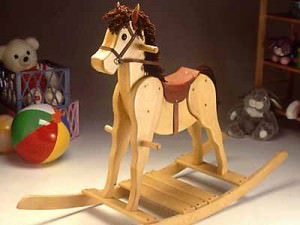 Rocking horse – a toy horse that is attached to rockers and that moves back and forth while a child sits on it.

Generations –  a group of people born and living during the same time.

Steed – a horse that a person rides.

Kinetic – of or relating to the movement of physical objects.

Stimulate – to make (something) more active.

Hooking up – to connect or attach (something) with a hook.

Hub – the central and most active part or place.

Bursts – to break open or into pieces in a sudden and violent way.

Power – to supply (something) with power.

Household – the people in a family or other group that are living together in one house.

Combat – to try to stop (something) from happening or getting worse.

Obesity – very fat : fat in a way that is unhealthy.