It’s Wednesday today and you know what that means: a new chapter of “The Decision”, a thrilling novel written by the very founder of ABA English!

Ready? Let’s do this.

If you forgot to read Chapter 8… here it is.

“I need to have a shower, not now”, Mike said to the woman.

Surprised by his attitude, she showed him where the bathroom was. Without waiting for any more reactions, Mike closed the door behind him and locked it. He stayed in the bath for over fifteen minutes. He took another five minutes to dry off, another two to examine his face in the mirror, and another five or six to put on some clothes he found. In total, he must have been in the bathroom about half an hour.

Mike wasn’t in a hurry. He knew that when he came out of the bathroom, the woman would ask him the same questions, and he still had to get used to his new life.

He wasn’t scared, simply unaware of what was happening. Everything was spinning around him and he couldn’t understand what was going on. The only person he knew how to be himself with, was himself, but he was no longer the old Mike. He was only someone pretending to be somebody else.

As he walked down the stairs and towards the dinning room, he saw the woman had reapplied lipstick again. Now she seemed more sure of herself, so he would have to, too.

“Where are they, Mike?”, she asked again.

“Do you want the long answer or the short one?”, he answered. 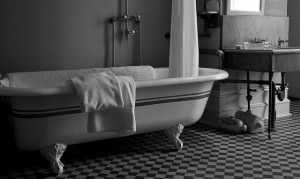 Locked – to fasten the door, lid, etc., of (something) with a lock.

Dry off – to make (someone or something) dry.

Spinning – to seem to be moving around in a way that makes you feel dizzy or sick.

Pretending – to act as if something is true when it is not true.

Reapplied – to put or spread (something) again on a surface, a part of the body, etc.