Learn English with the News: “Banksy in New York”

How are you today? We would love to know, so tell us in the comments’ section below!

Almost everyone knows Banksy, the famous England-based graffiti artist, political activist, film director, and painter. This news article will give you more insight into his art and the amounts of money people pay for it!

No one knows what he looks like, but his art is instantly recognizable.

The world-renowned British artist Banksy has set up shop in New York City. The artist has begun a month-long project across New York City. Called “Better Out Than In,” the project has Banksy attempting to create a new work of art each day in October. On October 1, Banksy unveiled a painting of two boys with one pointing to a sign that reads “Graffiti Is A Crime.”

The exact location of the pieces are not revealed, but via social media, word spreads fast about where to find them.

Banksy has become a coveted contemporary painter in the art world, known for his trademark spray-paint stencils that offer social commentary. He’s also become a hotly sought after artist among collectors, with a recent work of his selling at auction for more than 1 million dollars. 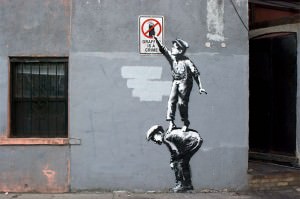 Recognizable – to know and remember (someone or something) because of previous knowledge or experience.

Set up shop – to start a business or activity in a particular place.

Unveiled – to show or reveal (something) to others for the first time.

Revealed – to make (something) known.

Coveted – to want (something that you do not have) very much.

Trademark – something (such as a word) that identifies a particular company’s product and cannot be used by another company without permission.

Auction – a public sale at which things are sold to the people who offer to pay the most.