Hong Kong Airlines has announced that all their cabin crew members will have to train in Wing Chun, a type of Kung Fu practiced by Bruce Lee.

Their reasoning for this is to allow their female crew to be in better shape and be able to control aggressive passengers. Recently, one of the flight attendants had to help an overweight passenger to the bathroom and realized she found it a lot easier after the training. Another said she felt safer knowing she could defend herself in a difficult situation.

Wing Chun is a martial art easily performed in small places, like inside airplanes. This makes it very useful since the airline said that each week there are on average three incidences in which the cabin crew has to deal with disruptive clients.

What do you think of this? Do you think it’s useful? Do you practice a martial art? 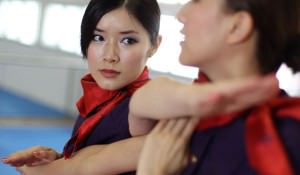 Cabin crew – (noun) Staff on a plane or ship.

To train – (verb) Teach a skill through regular practice and instruction.

To be in shape – (verb) To be physically in good condition.

Flight attendants – (noun) Another word for the staff on a plane.

Performed – (verb) To carry out an action, task of function.

Incidences – (noun) The  frequency of something unwanted.

Disruptive – (adjective) That causes or tends to cause an interruption.

Stewardess – (noun) The woman who looks after the passengers on a plane or ship. Part of the cabin crew