With half the world watching, Kate Middleton and Prince William only have two days to prepare for the big day – their Royal Wedding.

They met 10 years ago at university where they were both studying Art History. But it was only two years later that their relationship became official and the world welcomed the new couple.

On the 29th of April, over 1,900 people will be flying in from all over the world to celebrate this special wedding. From the Beckhams and Elton John to the King and Queen of Norway, King Simeon II and Queen Margarita of Bulgaria and Princess Lalla Salma of Morocco, the guest list is a mix of friends, family, dignitaries and governors.

At 8:15 in the morning, guests will begin to arrive at Westminster Abbey, the huge gothic church located in the center of London. The service will begin at 11:00 when Prince William will be married to Miss Middleton by the Archbishop of Canterbury. Big screens erected in Hyde Park and Trafalgar Square will allow the crowd to watch the ceremony taking place. This day has been declared a national holiday, so families can take a picnic down to the park and enjoy the show.

The couple has generously asked guests to donate to one of 26 charities instead of giving them presents; this is a lovely gesture from the future King.

Will you be watching the Royal Wedding? Don’t you think it would be amazing if the wedding was like the video below? 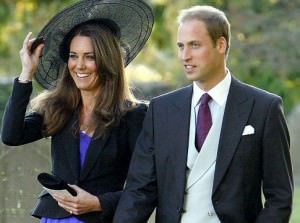 Flying in: (verb) to travel by plane to a place.

Guest list: (noun) a list of people who  are invited to a place or an event as a special honor.

Dignitaries: (noun) a person who has a high rank or an important position.

Screens: (noun) a large, flat, white surface on which images or movies are shown.

Declared: (verb) to say or state (something) in an official or public way.

Donate: (verb) to give (money, food, clothes, etc.) in order to help a person or organization.

Charities: (noun) the act of giving money, food, or other kinds of help to people who are poor, sick, etc.

Gesture: (noun) something said or done to show a particular feeling or attitude