You can find all this information, plus speaking, writing, vocabulary exercises and more on the ABA English Course Unit 78 – Two Friends.

Most English prepositions have several different functions. Also, different prepositions can have very similar uses. Often, the correct preposition cannot be guessed and you will just have to learn them a few at a time.

For fun and effective ideas on how to learn prepositions, check this post out.

Prepositions of movement are easy with @ABAEnglish

Prepositions of movement: to and from

We use “to” to indicate a destination.

“Bernard is travelling to Spain by plane”

We use “from” to indicate the place or direction from which somebody or something starts.

“Is he leaving from here?”

Prepositions of movement: into, in and out of

Be careful: there is a difference between “in” and “into” even if at firs they seem the same. “In” refers to a location or a position whereas “into” indicates movement.

“The strawberries are in the fridge”

“She was getting out of the car and into the hotel”

If you observe the example above, you’ll also see the prepositions “out of”. “Out of” also indicates movement and is used when you leave a place.

“I was coming out of the restaurant when I saw Olivier”

Prepositions of movement: on and off

“Take your shoes off and put them on the floor”

Prepositions of movement: up and down

“Linda always goes up the stairs and comes down in the lift. This way she is always fit and healthy!”

Prepositions of movement: over and under

If one thing is “over” another thing, it means that it is in a position above or higher than it.

“Ladies and gentlemen, we are now flying over the Alps”

And “under” is the opposite of “over”. If you go “under” something, you move to a lower positions or place with respect to something else that would be over you.

“The little boy was hiding under the table”

Prepositions of movement: through and across

“Every Sunday, we walk across the bridge and through the park”

Prepositions of movement: along, round and past

If you move or look “along” something, such as a road, you move or look towards the end of it. To move “round” a place means to go along its edge in a circular direction. And finally, to move “past” a place, it means it is beyond or further than that place.

“You will need to drive along this road, round the stadium and past the hospital”

Well done! You just revised the grammar from Unit 78! 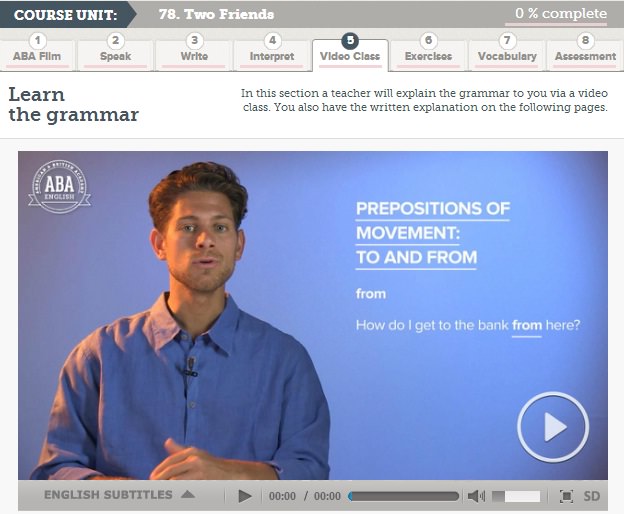 In Unit 78 – Two Friends, you will meet Victor and Mike. Find out how complicated it is to get to Victor’s new flat!