A long, long time ago, in the year 1500, a Portuguese fleet of ships led by Pedro Alvares Cabral arrived on the beaches of a beautiful, unknown land: Brazil.

By 1549, Brazil was considered a Royal Colony of Portugal – the only South American country to be ruled by the Portuguese.

Colonial Brazil was used by Portugal for its rich natural resources. For several hundred years, the settlers harvested sugar and wood, and mined the gold. During this time, with the need for more slaves to exploit the land, bandeirantes went inland to capture Native Indians to work in the plantations, and the Portuguese also brought over African slaves. In fact, over 650,000 slaves were sent to work in the goldfields.

Slowly, the Brazilian people became more unhappy with their situation, even though Indian slavery was abolished in 1758. 30 years later, Joaquim da Silva Xavier, known as “Tiradentes” (a nickname that means he pulled teeth out, because he was a dentist by profession), created the Incofidência Mineira movement, which fought for independence. Unfortunately, da Silva’s plans were discovered and he was killed.

During the Napoleonic Wars, King João VI, scared of the French army, left Portugal in 1808 and set up his court in Rio de Janeiro. He opened universities, banks and libraries but decided to go home to Portugal in 1820. He left his son Pedro as regent. The govenrment in Lisbon wanted Pedro to come back to Portugal, but Pedro said no and on September 7th, 1822, he declared the independence of Brazil. He was now Emperor Pedro I. The story says that, on the banks of the Ipiranga River, Don Pedro shouted “Independêcia ou morte!” (Independence or death!). The independence of Brazil was now a reality. 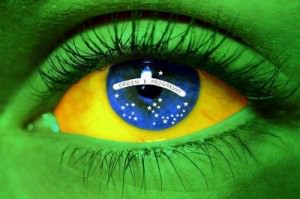 Fleet – (noun) a group of military ships that are controlled by one leader.

Resources – (noun) something that a country has and can use to increase its wealth.

Settlers – (noun) a person who goes to live in a new place where usually there are few or no people.

Harvested – (verb) to gather a plant or plant product that is grown by farmers.

Slaves – (noun) someone who is legally owned by another person and is forced to work for that person without pay.

Plantations – (noun) a large area of land especially in a hot part of the world where crops (such as cotton) are grown.

Abolished – (verb) to officially end or stop (something, such as a law).

Army – (noun) a large group of soldiers organized to fight battles on land.

Court – (noun) a formal legal meeting in which evidence about crimes, disagreements, etc., is presented to a judge and often a jury so that decisions can be made according to the law.

Regent – (noun) a person who rules a kingdom when the king or queen is not able to rule because he or she is sick, too young, etc.

2011-09-06
Share
Previous Past Simple, Present Perfect and Past Perfect
Next Be inspired by Steve Jobs