Be inspired by Steve Jobs 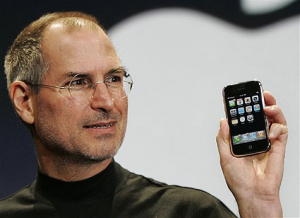 Sometimes we all need some inspiring words from a great leader. Someone who will push us to work harder, learn more and be better in every way.

Some of you have maybe seen the Steve Jobs speech at Stanford University, but for those of you that haven’t, we recommend you watch the following videos (part 1 and 2). They are subtitled in English. Below the videos you will find the explanation of the more complicated words of vocabulary.

It will take you about 15 minutes to watch the videos, but we promise it is worth it.

Enjoy and be inspired.

Commencement – (noun) a ceremony during which degrees or diplomas are given to students who have graduated from a school or college.

No big deal -(saying) something that isn’t very important.

Connecting the dots – (verb) to learn or understand how different things are related.

Refused – (verb) to say or show that you are not willing to do something that someone wants you to do.

Relented – (verb) to agree to do or accept something that you have been resisting or opposing.

Naively – (adverb) having or showing a lack of experience or knowledge : innocent or simple.

Tuition – (noun) money that is paid to a school for the right to study there.

Figure it out – (verb) to understand or find (something, such as a reason or a solution) by thinking.

Drop out – (verb) to stop attending a school or university before you have completed your studies.

Stumble into – (verb) to find or learn about something unexpectedly.

Fired – (verb) to dismiss (someone) from a job.

Falling out – (verb) to have an argument.

Baton – (noun) a stick that is passed from one runner to the next runner in a relay race. It is also used figuratively, you pass a concept or idea on to the next person.

Tool – (noun) something (such as a hammer, saw, shovel, etc.) that you hold in your hand and use for a particular task.

Hitchhiking – (verb) to get a ride in a passing vehicle by holding out your arm with your thumb up as you stand on the side of the road.

Foolish – having or showing a lack of good sense or judgment. Steve Jobs says this because we should keep being children at heart, following our dreams and not just following everyone else.

2011-09-08
Share
Previous Happy Indepence Day Brazil!
Next Day to Day Sentences: “We may go to Italy for our holidays next year”