This time last year the world was paralysed as flights from and to Europe were cancelled because of the ash coming from Iceland’s Eyjafjallajökull volcano.

Now, another volcano, the Grimsvotn, has begun erupting as well and several airports have already been closed.

Watch the following CNN report and read the content below to help you understand the video.

“The sequel to last year’s Icelandic volcano is one that’s spewing ash ten times what we saw in Spring of 2010. It’s a real problem on the ground.

– You couldn’t see anything in front of you, we had our highbeams on for a little bit and switched them down because it was like being in a snowstorm.

But in the air, despite how bad it looks, European airlines have room to breath.

– Fortunately I think we can truly say that the nature of this eruption will not cause similar disturbances as last year.

– Had we had the same scenario this time last year we would be talking about 2 to 3,000 flights being cancelled because any part of the airspace that had any possible contamination would’ve been closed.

Two major reasons for that: one, this volcano, Grimsvotn, is acting quite differently from the one that grounded millions of travellers in 2010.

– The height of the plume is a little bit higher but because the ash particles are much larger they will fall out more rapidly from the atmosphere.

But it’s not over yet, forecasters predict the ash cloud invades all british air space, including one of world’s busiest airports , by Wednesday.” 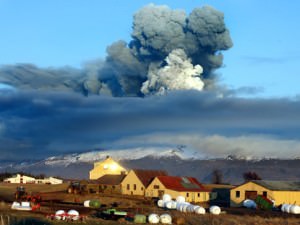 Paralysed – (verb) to make (someone or something) unable to function, act, or move.

Ash – (noun) the soft gray powder that remains after something (such as a cigarette or wood) has been completely burned and destroyed by fire.

Erupting – (verb) to send out rocks, ash, lava, etc., in a sudden explosion.

Sequel – (verb) something that happens after and usually as a result of a previous event.

Spewing – (verb) to flow out of something in a fast and forceful way.

Disturbances – (noun) something that stops you from working, sleeping, etc. : the act of disturbing someone or something.

Grounded – (verb) to prevent (an aircraft or a pilot) from flying.

Highbeams – (noun) the setting of a vehicle’s headlights that makes the brightest light.

Switched them down -(verb) synonymous to turn down, lower.

Room to breath – (verb) to feel free of restraint.

Plume – (noun) something (such as smoke, steam, or water) that rises into the air in a tall, thin shape.

Particles – (noun) a very small piece of something.

Policies – (noun) an officially accepted set of rules or ideas about what should be done.

Denser – (adjective) having parts that are close together.

Forecasters – (noun) to say that (something) will happen in the future : to predict (something, such as weather) after looking at the information that is available.