What started out as a worldwide sensation for smart phones has finally hit the Internet! Google Chrome now supports a limited version of the popular game Angry Birds.

Only 3 levels are currently available along with an extra Chrome Dimension which is unique for Angry Birds players on Google Chrome only.  Even so, the game is free and very entertaining for what it’s worth.

The player is given a set of birds at the beginning of each round which must be thrown with a slingshot with the goal of destroying the green pigs. The green pigs are often barricaded and protected by different structures made of wood, stone, and glass. Each kind of bird has its own weight so not all of them have the same strength or ability to destroy the structures that protect the green pigs.

WARNING: This simple game is quite addictive! You will soon find yourself hating litltle green pigs like never before…

Why is this news? Because it’s one of our favourite things on the Internet right now! 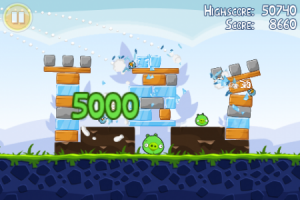 Sensation – (noun) someone or something that causes a lot of excitement and interest — usually singular.

Round – (noun) one of a series of similar events.

Slingshot – (noun) a Y-shaped stick with an elastic band attached to it that is used for shooting small stones —called also (Brit) catapult.

Barricaded – (noun) a temporary wall, fence, or similar structure that is built to prevent people from entering a place or area.

Addictive – (adj.) very enjoyable in a way that makes you want to do or have something again.