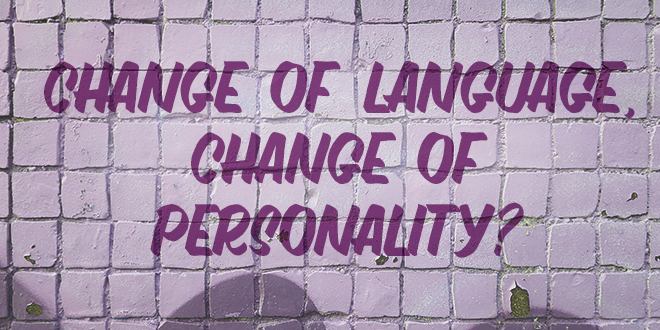 How does the language we speak influence our personality?

If you are reading this article you are very likely an English student and you intend to speak English fluently someday. Surely there have been many occasions in your own life where you have imagined yourself speaking English with other people. Have you ever stopped to think about whether learning and speaking English would change your personality and the way you see the world? Both speaking fluently and learning a new language is very empowering and you may see a side to yourself you have never seen.

How does the language we speak influence our personality? Find out with @abaenglish

The Sapir-Whorf hypothesis is a theory of linguistic relativism which proposes that there is a correlation between the language we speak and the way in which we understand and conceptualize the world.

If it sounds really confusing, don’t worry! Here are a few tips to help clarify what we mean:

1. Our perception of language

The perception we have of a language has a great influence on how we feel when we speak it. For example, if you think that French is a refined language, it is possible that when you speak it you may feel more refined and even smarter. If you think English is the language of business, you’ll probably feel more competent and able to achieve your professional goals when you speak it.

2. The culture of the country

Several studies on bilinguals show that, according to the language they use, people are more inclined to speak about one subject or another. For example, when they speak one of the languages, they tend to unconsciously avoid taboo subjects that they have no problem speaking about when they use a different language.

3. The genre of words

In some languages, especially those of Romanesque origin, nouns have different gender forms (masculine and feminine, even neutral in some cases). Gender stereotypes influence the concept we have about certain terms. For example, the word “bridge” is masculine in French (pont) and feminine in German (Brücke). Therefore, when a German person is asked to describe a bridge, they would use adjectives that are traditionally associated with the female personality: elegant, beautiful, charming. While a French person would use adjectives that until now have always been associated with masculinity: imposing, giant, robust.

4. The functioning of a bilingual brain

Bilingual people have a system in the brain similar to a traffic light, which allows them to move from one language to another, quickly without forgetting the topic being spoken about. This ability, which is acquired over years, allows bilingual people a greater ability to concentrate and adapt to various situations when swapping languages.

5. Influence of bilingualism on our moral judgment

When we speak in a second language, we adopt a more rational thought process because the emotional charge is usually reserved for our mother tongue or primary language (that’s why we usually resort back to our mother tongue when we are very angry or feel a strong emotion). This can affect our way of judging certain situations or acts depending on the language that we have to use to interact. In short, it is easier for us to be more impartial and objective in a different language.

Would you like to experience for yourself the feeling of learning and speaking another language? With the natural ABA English method you’ll learn English by imitating the process by which a child learns its mother tongue: first you’ll understand and speak the language, then you’ll read and write it.