How do the English talk? 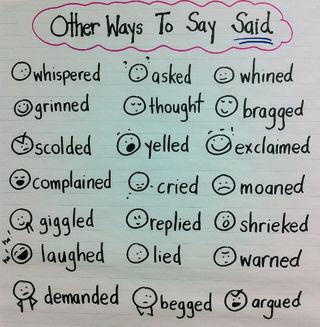 Today we’re going to look at synonyms for the verb “say”. Why? Because using different words will expand your vocabulary and make it richer. Instead of:

– She said how she was on holiday and a man said to her if she wanted to go dancing. She said she’d love to!

– She explained how she was on holiday and a man asked her if she wanted to go dancing. She whispered she’d love to!

First, let’s see the meaning of each of these words, followed by an example. Ready? Great, let’s start!

Whisper – to speak very softly or quietly.
Example: We were in the library when he whispered “I love you”

Grin – to smile widely. It also means to talk when you’re smiling or happy.
Example: I asked him if he got the job. “Yes!”, he grinned.

Scold – to speak in an angry or critical way to (someone who has done something wrong).
Example: “You are so untidy!”, my Mum scolded me this morning.

Complain – to say (something that expresses annoyance or unhappiness).
Example: “I hate my job…” Gina complained, last night.

Giggle – to laugh in a nervous or childlike way.
Example: She’s so shy, if you ask her name she giggles “Jenny”.

Laugh – to say (something) in an amused way.
Example: “I’ve never seen anything so ridiculous”, he laughed.

Demand – to say in a forceful way that something must be done or given to you : to say that you have a right to (something).
Example: “The teacher demanded we all appologise”

Ask – to say or write something to someone as a way of gaining information : to request an answer to a question.
Example: “I would like to ask you a question…”

Think – to believe that something is true, that a particular situation exists, that something will happen, etc.
Example: “Maria doesn’t think the republicans will win”

Yell – to say (something) very loudly especially because you are angry, surprised, or are trying to get someone’s attention.
Example: “Look out!”, she yelled, “there’s a car coming”.

Cry – to produce tears from your eyes often while making loud sounds because of pain, sorrow, or other strong emotions. It can also mean shouting or saying something loudly.
Example: “Why don’t you love me anymore?!”, she cried.

Reply – to say, write, or do something as an answer or response.
Example: Tom replied that he would not like to go to the party”

Lie – to say or write something that is not true in order to deceive someone : to tell a lie.
Example: I can’t believe you lied to me!

Beg – to ask (someone) in a very serious and emotional way for something needed or wanted very much.
Example: She begged her friend to buy her an icecream

Brag – to talk about yourself, your achievements, your family, etc., in a way that shows too much pride.
Example: He is always bragging about his daughter; she’s a famous singer.

Exclaim – to say (something) in an enthusiastic or forceful way.
Example: “Oh, hello!”, she exclaimed when she saw me.

Moan – to express unhappiness about something.
Example: “My stomach hurts”, John moaned.

Shriek – to make a loud, high-pitched cry.
Example: “The baby shrieked in delight”

Warn – to tell (someone) about possible danger or trouble.
Example: “The company has warned employees that there will be downsizing”

Argue – to give reasons for or against something : to say or write things in order to change someone’s opinion about what is true, what should be done, etc.
Example: “Maria argued that the bus was faster than the underground”

Wow, we’ve learnt a lot of new words today, right? Which is your favourite?

2013-02-12
Share
Previous What isn’t a spectator sport?
Next Learn English with the News: “Brazil Carnival!”