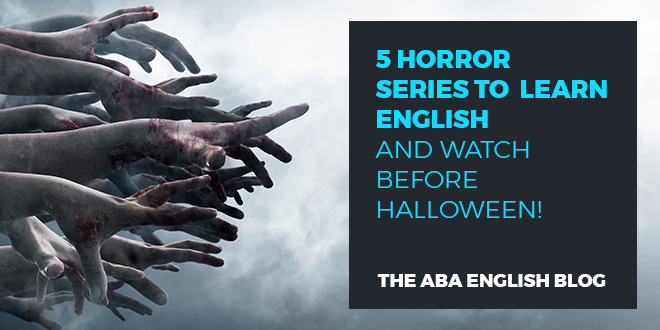 Five Horror Series to Learn English With (And to Watch Before Halloween!)

It is important to take advantage of all the opportunities that you are presented with to learn and practice English. It does not matter what your tastes or preferences are, especially when it comes to movies and television series, because the important thing is to take advantage of that pleasant (or frightening) leisure time to expose yourself to the language. If you like horror movies and series then you are one of us!

Watching horror series in English can definitely help you improve your English and expand your vocabulary. Here we present five series to watch just in time to prepare for Halloween.

This horror series came out in 2010 and has been nominated for a Golden Globe. The story is about police officer Rick Grimes who is left in a coma after being shot. Upon waking up he finds himself in the middle of a zombie apocalypse. He then takes over and creates a group of which he becomes the leader to help people survive by finding them a safe place and food. The central plot is focused on survival and everything that needs to be done to protect life.

Thanks to this series you will be able to learn specific vocabulary as well as listen to different accents. In addition to enjoying the plot and all the action, you will learn a lot of English!

Produced by Ryan Murphy and Brad Falchuk, American Horror Story was released in 2011. It has been very successful and has won two Golden Globes. It is an anthology series that includes different characters and places. These places include a house in which murders have been committed, an asylum, a hotel, and a possessed farm, among many others.

Thanks to this series you will be able to train your ear to understand the American accent in addition to expanding your vocabulary, all while your hair stands on end.

This series premiered in 2014 and its last season was in 2017. With the city of New York as a backdrop, it tells the story of Dr Ephraim Goodweather who is in charge of disease control in the city. He and his team must investigate an outbreak of a mysterious virus related to vampirism. This is how they will try to save the future of humanity.

The Strain will definitely keep you in suspense and will make you jump out of your chair many times, but not before teaching you several technical terms from the fields of health and medicine in English.

The Terror was released in March 2018 and is based on real events. It tells the story of the crew of a Royal Naval expedition from England that is sent through the Arctic to find another way to reach China and India. But they run into a polar predator that makes their expedition a survival game.

While this series will definitely keep you hooked, it will also help you familiarize yourself with the British accent.

With three seasons from 2013 to 2015, Hemlock Grove tells the story of the murder of a young girl in a small town in Pennsylvania. There are two suspects: Peter, a 17-year-old gypsy, and Roman, the heir of the Godfrey company. They decide to look for the murderer on their own, but the secrets which are part of the people’s daily life will complicate the plot.

As for learning English, the series offers a challenging linguistic context with a wide variety of vocabulary and dialogues that develop quickly.

ABA English has a natural learning method that is based on short films and audiovisual resources that will help you learn easily. Thanks to this method, not only will you remember the grammar rules easily, but it will also help you to start communicating in English from the first day. Why not try our course?

Yes, I want to see a short film!
Yes, I want to download the app!
2018-10-11
Share
Previous Nonviolent Communication: How to Resolve Conflicts in English
Next Subject-Verb Agreement in English Syntax