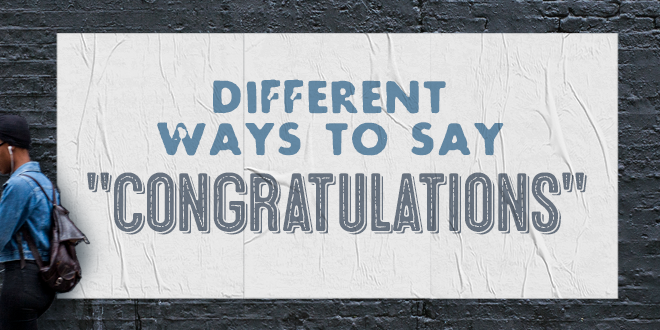 Expressions to congratulate someone in English

There is nothing more beautiful than sharing a happy and important moment with friends. The best way to participate in the joy and accomplishments of others is to simply be there and congratulate them with all of your heart. There are many different occasions and circumstances in which you might need to congratulate someone such as births, marriages, or receiving diplomas, as well as many more.

@abaenglish presents a list of expressions to congratulate someone in English.

If the other party is an English-speaking person, do not let yourself be caught by surprise without being prepared. Read the following article and choose the most appropriate way to congratulate them.

I am so happy you have achieved your goal in such a great way. Congratulations!

Congratulations on your beautiful new daughter!

This expression is more formal and a little less widespread. It comes from the Latin felicitare (to make happy) and appeared in the singular in the 18th century. In the 19th century it was very popular, but nowadays it is used very little.

I offer you my felicitations on your speech.

I should express my felicitations on your marriage.

The term cheers goes back to the late 12th century or early 13th century. It is derived from the Greek kára which means “head.” In the United Kingdom, cheers can also be used as a toast or to mean “thank you.” The term was probably born in the nautical world, as Daniel Defoe states in Captain Singleton (1720): “We gave them a cheer, as the seamen call it.” The number three, in this expression, indicates emphasis. This is an informal way to congratulate someone.

Three cheers for your newborn baby!

Kudos is derived from the Greek kydos (glory) and was born as a word with an ironic meaning. It seems that, in fact, the word was used for the first time in English by the poet Robert Southey, who, when writing about the naming of William Cavendish-Bentick, Duke of Portland, as Chancellor of Oxford, commented that the duke’s coat was “kudos’d egregiously in heathen Greek.” Despite this, in the 19th century, the term was extended to the university environment with the meaning of “felicitations.” Later, in the 20th century, it became a widespread and common expression. It is generally used to congratulate a person who has achieved an important accomplishment either in their career or in their social position.

As an actor, he has earned a certain amount of kudos.

Kudos to the writer for creating such a wonderful story.

The expressions that follow are other common phrases used to congratulate someone.

What a wonderful talk. I was impressed!

You graduated! You did it!

I knew you could do it. Well done!

These are some of the most popular expressions used to congratulate someone in English.

If you need to improve your language skills, why not try an online English course? ABA English puts at your disposal its natural and effective method to learn English effortlessly. The course includes 144 video classes and the same number of short films in addition to qualified native teachers. What are you waiting for?