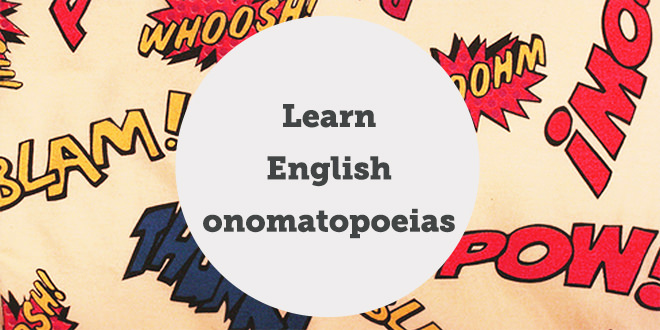 Do you know what an onomatopoeia is?

Today we are going to look at onomatopoeia. Say what?
While the spelling and pronunciation of this interesting word may be quite difficult, the learning of onomatopoeia examples certainly aren’t.

Basically, onomatopoeia is defined as a word which imitates the natural sound of things.
It creates a sound effect of the “thing” being described. Still confused? Don’t be!

Let us delve a little deeper into this concept, by looking at some examples.

Firstly, if we look at the following sentence we can better understand the function.

“The water which was falling from the roof ruined my flooring”

As you can see the first sentence is describing both the sound that water makes “drip” and also the action of it falling onto the bed. This is a sentence containing onomatopoeia.

The second sentence is more direct and expresses the action in a less poetic way.

Let’s have a look at a few more examples so you can practise them at home!

I’ve just learnt what an onomatopoeia is with @abaenglish