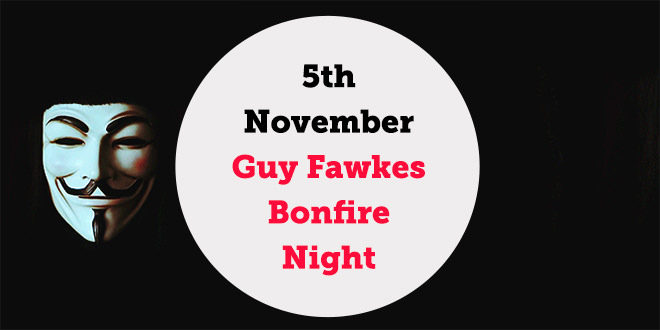 Have you ever heard of Bonfire Night also called Guy Fawkes Night? We’re pretty sure you’ve seen or heard of the movie V for Vendetta.

So… do you want to find out more about it? Then go ahead! Read the text with the help of our vocabulary at the end of the it!

Guy Fawkes Night, also known as Guy Fawkes Day, Bonfire Night and Fireworks Night, is an annual commemoration observed on 5 November, primarily in Great Britain. Its history begins with the events of 5 November 1605, when Guy Fawkes, a member of the Gunpowder Plot, was arrested while guarding explosives the plotters had placed beneath the House of Lords. Celebrating the fact that King James I had survived the attempt on his life, people lit bonfires around London, and months later the date was declared annual public day of thanksgiving for the plot’s failure. At present bonfires are lit in Britain every 5th of November to commemorate the plot.

known as = recognized as

bonfire = a large outdoor fire, either for burning waste or for a party

gunpowder = an explosive substance used in bombs and fireworks

plot = a secret plan by a group of people, to do something harmful or illegal

plotter = someone who makes and organize a plot

beneath = in or to a lower position than something, or directly under something

thanksgiving = the act of giving thanks; grateful acknowledgment of benefits orfavors, especially to God

failure = nonperformance of something due, required, or expected

at present = in this time period

What do you think about it? Do you celebrate a special tradition in your city/country?

5th november bonfire night celebration guy fawkes parliament 2015-11-04
Share
Previous Do you know what an onomatopoeia is?
Next Popular Acronyms in English