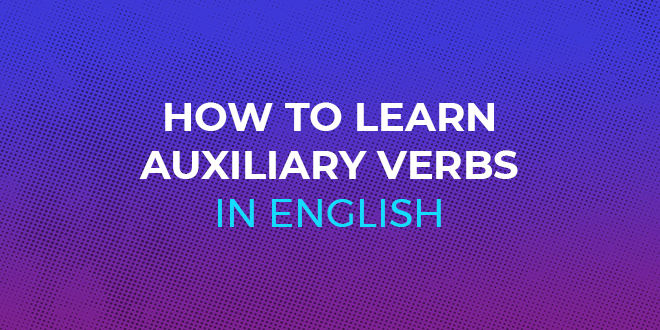 What Is an Auxiliary Verb?

You probably already know that in English, the verbs are classified into different groups according to their uses and functions. One of those groups is auxiliary verbs.

When to Use an Auxiliary Verb

They are used to form the perfect and continuous tenses as well as the passive voice. English also uses auxiliary verbs to form negative and interrogative sentences.

English Auxiliary Verb: to be

To be is used to form the continuous tenses and the passive voice. Like all conjugated auxiliary verbs in English, the verb to be is accompanied by another verb.

Present continuous:
She is working with an eco-friendly firm now.

Past continuous:
She was working with a non-profit organization.

Future:
She is going to be playing at the concert next Sunday.

Passive voice:
The house was built during the Great Depression.

English Auxiliary Verb: to do

If you are trying to understand the auxiliary verbs in English and their meaning, the verb to do may baffle you, just a bit. As an auxiliary, this verb is used in the formation of interrogative and negative sentences both in the present and in the past. In this case, it has no meaning itself.

Present interrogative:
What do you do for a living?

Past interrogative:
Did she break that window?

Past simple negative:
She did not break that window.

Note: There are contractions of to do that are used in negative sentences both in the present (do not = don’t, does not = doesn’t) and in the past (did not = didn’t). It is necessary to keep this in mind if you are doing auxiliary verb exercises in English so that you do not get confused.

English Auxiliary Verb: to have

In the active voice, this auxiliary is used to form the perfect tenses and is conjugated in the present (have, has) or in the past (had). It is combined with the past participle of the main verb.

Present:
You have a beautiful smile.

Past:
He has done some research on the subject.

In the passive voice, to have is conjugated in the present or the past tense. It is combined with both the verb to be and the past participle form of the main verb.

Present:
Something has to be done to solve the problem.

Past:
Some research has been done on that subject.

This auxiliary verb can also be found in interrogative and negative sentences.

Interrogatives:
Have you drunk too much?

Negative sentences:
I have not taken the test yet.

Note: There are contracted forms of to have that are used in negative sentences both in the present (have not = haven’t, has not = hasn’t) as well as in the past (had not = hadn’t).

Will does not change according to time, person, or number. The verb will is a modal verb that also functions as an auxiliary verb in English. It does this in the formation of the simple future (accompanied by another verb).

Assertion:
I will visit my best friend next week.

Negation:
I won’t go to the party next month.

It is also used in the following expressions.

Desire or intention:
I will do everything I can to help you.

Habits or trends:
He will tell you the truth most of the time, but not always.

Determination:
I decided to be an engineer, so I will be one.

Orders:
You will clean your room right now.

The verb would is, like will, a modal verb. It does not vary in person, time, or number. As an auxiliary verb in English, it is used in the second conditional for hypothetical situations. It appears in affirmative, negative, and interrogative sentences.

Assertion:
I would love to meet him someday.

Negation:
I came by taxi. He told me he wouldn’t drive me.

Interrogative:
Would you sell your house for one million dollars?

Here we have shown you how auxiliary verbs are used in English with explanations and examples. They are definitely an essential tool when it comes to being able to communicate fluently in this language. If you found this interesting and want to improve your skills in English, the language of the modern world, we put our teaching system at your disposal. With ABA English, you will have access to a learning method adapted specifically to your needs. Not only can you take classes about auxiliary verbs in English for free, but you will also have the possibility of having a private tutor to guide you through the entire learning path.

I want to take a free class.
I want to download the app.
2019-07-26
Share
Previous English Words for Flying | ABA English
Next The advantages of studying English online