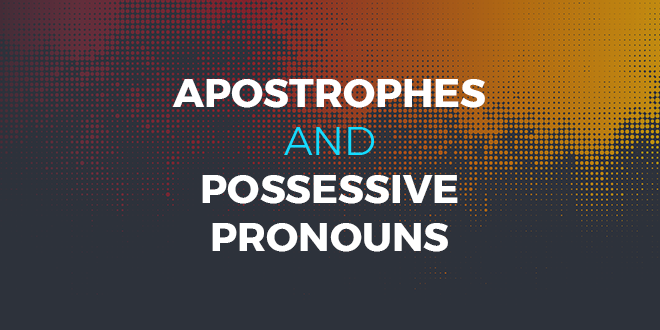 Today we will look at the way apostrophes are used with possessive pronouns… or rather how they aren’t used, in most cases. For the most common pronouns in the English language, you do not use an apostrophe to note possession. Instead, these common pronouns change other aspects of their spelling and word form when they become possessive.

Below is a chart of the eight most common pronouns in English and their possessive forms:

Notice that some of these pronouns have two possessive forms. That’s because, in the case of me, you, her, us, and them, the possessive form changes depending on its position in the sentence.

If this still sounds a little confusing, don’t worry—you’ll get the hang of this pattern quickly by looking at the examples below. (The possessed objects are underlined, and the possessive pronouns are in bold.)

This post was written by David Recine, TOEFL expert at Magoosh. For more TOEFL resources and practice tips, head over to the Magoosh TOEFL blog!

Sign up to the course
Download the app!
aba english free online course apostrophes in english magoosh online course pronouns in english 2017-03-31
Share
Previous 5 ways to learn English with your mobile phone
Next Eating out in English