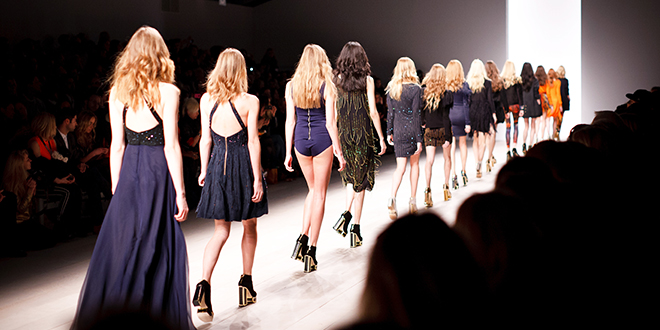 New York Fashion Week has once again left its mark. It took place from February 8 to 16 this year under the motto of creativity and renovation. The event was characterized by the perfect combination of classic models, a desire to amaze, and a freedom of expression that went beyond the conventional. Famous designers were joined on the runway by the emerging stars of the fashion world.

Designers not only considered every detail of their collections, but also where each runway show would take place. This was done in order to allow the guests to better enjoy the performance and to better understand what the word “fashion” means to each designer. The models were accompanied by less conventional celebrities, such as Ericka Hart, who modeled for Chromat without hiding her double mastectomy scars.

ABA English has chosen some of this year’s most important collections to give you a taste of the rich banquet that both New York and the fashion world had to offer.

Opening the show this year was a star of American fashion: Tom Ford. For his part, Tom Ford was clearly inspired by the ‘80s. Leopard print was a principal motif, enhanced by bright background colors ranging from emerald green to electric violet. The highlights of this collection were long garments and wide, comfortable jackets with complicated cuts.

Calvin Klein’s stage show was designed by Raf Simons, who presented his vision of American society. Three trucks began the show, pouring out a mountain of popcorn through which models walked in firefighter jackets and non-slip boots. The models evoked the American heroes of yesterday and today: firefighters. The long dresses of the models, with their cartoon character motifs and touches of traditional American quilts, conveyed a mixture of simplicity, tradition, and originality.

The Beckham collection this year combined severity with asymmetric cuts. The collection focused on detail, alternating long, asymmetrically pleated dresses with exaggerated layered pieces, worn tight at the waist and broad at the shoulders.

Tomas Maier was inspired by Manhattan, choosing the atmosphere of a New York loft as the backdrop to the magnificent pieces in his collection. Of particular interest were the handcrafted fabrics, fine knit embroidery, and silk pajamas for both men and women.

The offices of Condé Nast in Times Square were the home Alexander Wang chose for his runway show. Both the clothing and the hairstyles were partly inspired by the ‘80s. A sporty style was favored, with models wearing sunglasses and tight-fitting clothing with ultra-transparent nylons. The color scheme was mostly black and gray, with some bright pink pieces for a touch of color.

This season, Jeremy Scott chose science fiction as his inspiration. Models wore suits with multiple pockets, miniskirts with straps, and skirts made of transparent PVC. The set looked like something out of a science fiction movie, with a fluorescent tonality. Pieces of fluff were applied to the jackets, giving an impression of Popples which were cartoon characters from the ‘80s. It was Jeremy Scott who admitted the reference to Cicciolina, the Italo-Hungarian porn star who used to carry Popples stuffed animals around, saying the Cicciolina reference gave the show a touch of “seductress and cute and cuddly” at the same time.

The classic elegance and simplicity of their clothing made the models of The Row stand out. In the midst of so much creativity and eccentricity, the simple cuts and monochrome gray and black tones gave the public’s eyes and taste a much-needed moment of relaxation. Perhaps this simplicity represented a true revolution in the colorful universe of New York Fashion Week.

For their style inspiration this year, the designers of Vaquera chose to mix the sacred and the profane, sanctity and sin, verging on desecration. Religious and gambling iconography were constantly mixed together in an irreparable conflict in the name of fashion. The models alternated religious icons with those of the casino: from the Pope’s miter to a full body print of a roulette table. Between one symbol and another appeared a red devil, clearing up any doubt about the show’s theme.

These are just a few of the designers who showed at NYFW. This is without a doubt an event that fashion lovers cannot miss, but it is not just for fashion lovers. In addition to displaying the designs and trends of the moment, NYFW is an excellent opportunity for viewers to find interesting ideas for their own unique look, whether they want to give themselves a sense ofself-confidence or just love classic simplicity.

If you are planning on attending fashion week next season, it will be useful to practice your American English. ABA English can help you improve your command of the language. In addition to grammar exercises, ABA English offers a simple and natural method to learn to express yourself in English, without having to wait for perfect grammar. What are you waiting for? Start getting ready for your New York fashion experience today!

I want to start the course!
I want to try the app!
2018-02-26
Share
Previous Family Members in English
Next Do You Have a Romantic Date Coming Up? Here Are Some False Friends in English to Avoid