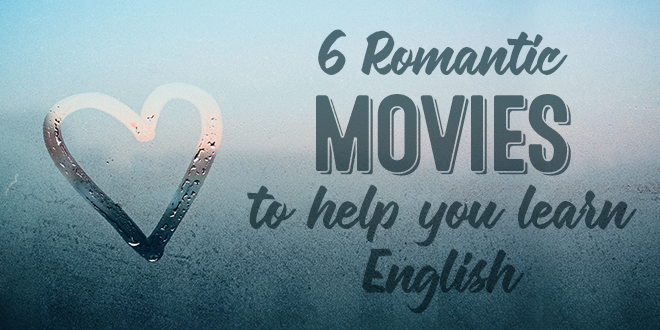 One effective and fun way to learn English is to watch films in their original language with subtitles in your native language. Watching a film in English assists in implicit learning, involves the senses, and is enjoyable as well. However, to make the most of the experience, it is important to choose a good movie.

Learning English through love stories: discover some of the most successful films with @ABAEnglish

One recommended film genre is definitely romance, whether a romantic comedy or a drama, since these films often present a linear plot that fosters a universal understanding of the storyline and the acquisition of new words. They are also suitable for people of all ages, therefore lending themselves as equally to a family movie night as candlelight. The following are six romantic films in English that we have chosen specifically for you.

This brilliant Rob Reiner comedy from 1989 is, without a doubt, a timeless classic. If you have never seen it before, you should know that it is an essential watch. It is fun, ingenious, and undoubtedly romantic. Sally, played by Meg Ryan, has just broken up with her partner and meets Harry, played by Billy Crystal, in whom she finds a very good friend. But, as she herself recognizes, a man and a woman can never be friends. The story follows their relationship over 10 years of ups and downs, but you will have to watch it to see how it ends!

This is a 2004 film directed by Nick Cassavetes, based on the novel of the same name by Nicholas Sparks. It tells the story of a man in a nursing home who reads a moving love story to an elderly woman suffering from Alzheimer’s disease. The protagonists of the story are two young people from the 1940s, Noah and Allie, who meet in a coastal city in North Carolina, where Allie comes to spend the summer with her family. Even though Allie comes from a wealthy family and Noah is a local worker, they fall madly in love. Their love story, nonetheless, is abruptly interrupted by a number of circumstances and so the two do not see each other again, until Allie decides to return to town just before her marriage to Lon. The ending is a bit of a surprise, so it is better not to reveal too much of the plot here. Let’s just say it is a movie for incurable romantics!

Directed by John Wright, and based on the novel by Jane Austen, this 2005 film is faithful to the novel. In England, at the end of the eighteenth century, Mr. Bennet lives in the country with his wife and five daughters: Jane, Elizabeth, Mary, Kitty, and Lydia. Their lives go by monotonously until Charles Bingley arrives at a neighboring property, which will alter all of their lives. Besides being a good movie with a beautiful Oscar-nominated soundtrack composed by Dario Marianelli, it is an ideal movie for learning English. It is a retelling of an English literature classic, which you probably already know, and has the advantage of using textual quotes from the original novel. Lovers of this great English author cannot miss this film!

This 1999 film, is directed by Roger Michell and set in the English district of the same name. William Thacker lives with Spike, a somewhat disorganized friend. He owns a bookstore specializing in travel books, which is where he meets Anna Scott, an American movie star. Immediately after their first encounter the two begin dating, but will have to overcome many difficulties to make it work. The plot is animated and full of accidents, but, between one stumble and another, a happy ending is guaranteed!

William Shakespeare’s classic tragedy gets a modern remake in this 1996 film, directed by Baz Luhrmann . Medieval Verona becomes an imaginary Verona Beach in California, while the Montagues and Capulets become two rich families of industrialists fighting each other. The swords of the original become firearms and the youths of the rival sides act like real gangs. Previous knowledge of the plot of this film facilitates the understanding of the words and dialogues, which therefore makes it an effective tool for learning. As in the case of Pride and Prejudice, you will be able to recognize some textual quotes from Shakespeare’s drama. It is also interesting to see the famous tragedy set in a metropolitan environment.

This film is also based on a book, Ian McEwan’s novel of the same name. It premiered in 2007 and is the second work of director Joe Wright after Pride and Prejudice. It received seven Oscar nominations, with Italian composer Dario Marianelli winning for best original score. The film tells the story of Briony Tallis, a 13-year old British girl who jealously discovers the romance between her sister Cecilia and Robbie Turner, the son of their housekeeper and a childhood friend. As in the novel, the film has a three-part structure, each of which presents a different moment in Briony’s life, always seen in connection with the lives of Cecilia and Robbie and the consequences of their actions. If you lean towards sad love stories, then this is the movie for you. We do however advise you to start reading the novel or watching the film in your native tongue, since the plot is quite complex and wanting to piece it together can distract you from the language.

These are just some of the romantic films you can use to learn English. Of course, there are many others, from the timeless Gone with the Wind to Pretty Woman. If you have found our advice interesting, you ought to try the ABA English short films. They are short and specifically designed for learning English. That said, we hope you enjoy the films!